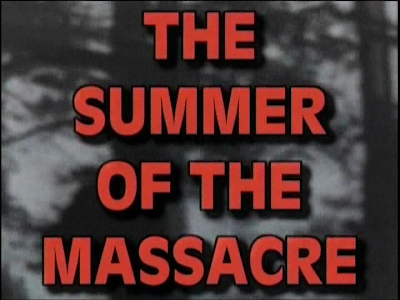 As I write this, I recall those early college years as an aspiring slasher aficionado.

Back then, the site Slasherpool.com was my haven and my personal spot for the best slasher film reviews, along with some fair look to other horror genres outside dead teenager films. The guy who owned it took it down by the time he began writing, or working, for one of the most useful horror sites created, Upcominghorrormovies.com, but I do remember Slasherpool reviewing nearly all slashers ever made.

The Summer of The Massacre was a stroll ride back to this time of my life, not because the film was good, but rather it reminded me of the weirder titles I came upon from that website. I believe it's high time for me to share my thoughts on this crazy SOV backwoods shlocker and why it is for the best to avoid it.

Marketed as UK's answer to Friday the 13th's Jason Voorhees, the film portrays the life of one masked slasher named Hammerhead, who luckily does not wear a giant papermache hammer over his face but instead hammers his victims to death. Technically speaking there is no plot; it's just a random barrage of campers walking into or being lost in the woods before getting the tar brained out of them by our star killer. In fact, early on we get our first set of murders and that took at least ten or fifteen minutes of screaming, kicking, knocking, braining, kicking, running, kicking, wrestling before Hammerhead finally got them all. (Did I also forgot to mention there was a lot of kicking? I didn't? Funny, felt like I didn't say it enough.)

There are no subplots, no twists, no surprises, just a lot of braining and bludgeoning ala hammer. The rest, as always from an SOV, suffers from the usual shoestring budget limitations so don't expect any talents here, or any wow-inducing camera tricks and editing, or a working script, or (but above all) a cool killer.

I feel a little insulted when they compared this Hammerhead with Jason; while Mr. Voorhees had done a lot of chases and sometimes lose grip of his targets, I wouldn't say he did it so many times that his movies would nearly be nothing else than him clumsily getting his victims back! This little movie is generally one long chases scene with a grunting maniac and a wildly screaming girl that's not even that exciting or realistic. (And yet, they try that "based on true story" gag here. That got me laughing off my tarts!)

The only good thing this movie did was, as mentioned prior, it reminded me of Slasherpool. In the ending credits, they gave a warm thanks to this site and it touched me into remembering those olden years that I regularly visited the site. I have no idea whether this film got a fair review in that site, but that's one star given for personal attainment! So that's tallying one star to it's score of 0 stars and that makes it...oh, just one star. Awkward... (Heh, at least I'm generous).

I wouldn't beat around the bush anymore, this film is bad. In a bad way. Don't hesitate to throw it in a vat of acid.