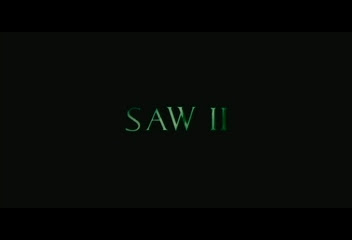 After the financial success of SAW (2004), a sequel was quickly green-lit despite James Wan not being present back to direct. Instead, the job landed on Darren Lynn Bousman, someone I would like to call a splatter genius for his rock splatter musical REPO! The Genetic Opera! (2008).

Now, the job of doing a sequel to something as clever and original as SAW is chancy; repeat what the original already done might end up with a dull new entry, while trying another approach might set off criticisms. Thus, warping the mythos into something easier to understand as the killer's already identified may not be the sharpest choice, but as a big rule of sequels to outdo the original, it's one kind of chance these people are willing to wager on.

To be fair, the plot is more elaborate as a thriller; instead of focusing on a puzzling predicament within a controlled space, SAW II furnished a more slasher-like storyline where eight captives must find the antidotes for the nerve agent they're breathing in through elaborate traps in order to live long enough until the rigged doors open. Of course, knowing Jigsaw, these traps are often deadly and the pressure of dying from the gas eventually sets some folks to start killing the others.

All the while, we get to know who the killer is: a cancer weakened engineer by the name of John Kramer. What is interesting about this is that despite being the mastermind for this set-piece, John spends the entire time being held in place and intimidated by Detective Eric Matthews while people continues to get hurt or die. At that, a good portion of the story is concentrated on how John became Jigsaw as well as his reasons for kidnapping Eric's son Daniel, who is one of this game's participants.

So far, the torture porn nature of the latter films is still absent here, save the truly cringing "Needle Room" scene where a player is tossed into a pile of discarded syringes to find a bottle of antidote. (A nod to Suspiria (1977)'s own razor wire room) Aforementioned, the film took more of a slasher film structure only instead of being chased by a killer with a handheld weapon, the traps are the killers and there's at least one for each victim. The traps aren't anything messy or lingeringly torturous, relying more on quick-play fatalities such as shootings and burnings. In fact, I see at least one or two nods to slasher/giallo flicks here, such as the peephole shooting being a clever wink to Dario's crazy masterpiece Opera (1987).

SAW II is actually a fair entry; while it lost a few key notes that made its parent film a success, its reliance on survival-style horror provided enough guts and gore to keep any horror fan happy. Its little mystery concerning who Jigsaw is and where the game is taking place do comes out as intriguing enough to sit though, but the main meat of a good reason to see this undoubtedly falls on the game itself and the painful torment awaiting its participants.

It still has the gritty look and artistic editing of the first and though the cast still needed a little work, they are not anywhere near bad. And, like a honored tradition, the film ends with a shocking twist that leaves everything to an open end that flows fluidly to a sequel, thus starts a series of unfortunate events that leads one new entry to another.

All in all, SAW II's decent take on a survival thriller marks the series' creative take. Though, whether this stroke continues or not is uncertain...

Bodycount:
1 male gets a nailed death mask clamped over his head
2 males electrocuted
1 male shot in the eye by a rigged revolver
1 male burned alive in furnace Trap
1 male gets a nailed baseball bat to the head
1 female succumbs to nerve agent
1 female had her wrists cut in hand trap, bled to death
1 male had his neck slashed with hacksaw
Total: 9
Posted by Kaijinu at 7:42 PM