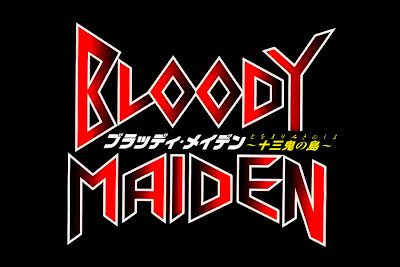 Let's try something a lot different for our slasher kicks; I always keep a good eye for something outside the celluloid norm when it comes to my slashers, such as books, novels or even comics that tackle the sub-genre with much originality and familiarity to keep me interested. For some time, I was into anime and manga, although lately I've been wary of my love for these Japanese cartoons and/or comics. The thought of mixing up slasher film plotting with this popular Japanese sub-culture came to me once in a while, but seeing how rare Japan even picks up on a bodycounter film, I was very skeptical if they would even do such a thing. So imagine my surprise when I saw this sexy graphic novel. 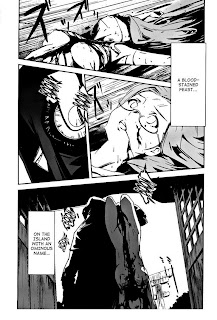 Starting off as no more than a club's trip to a secluded native island, a group of thirteen young, nubile and voluptuous girls find themselves trapped and hunted when a masked killer in a hoodie and with a penchant for death metal songs starts showing their ugly rear, killing them off one by one in accordance to a bizarre ritual that's supposed to appease the island's haunting spirits.

As the volume progresses, there are some plot twists thrown into the fray, which were fine until the final two chapters where everything kinda got out of hand. But before we can get to that, let's talk about what happened in media res.

Putting it simply, Bloody Maiden is a slasher film done in manga format, with some distinctive Japanese nerd fanservice (complete with stereotypes such as girls with gravity-defying bust sizes and lolita characters that are supposed to be older than they look) and "hyper-violence" that may or may not stand up with the likes of the American slashers that the comic tries to pay tribute to. The plot is a simple copy of Agatha Christie's Ten Little Indian story, wherein the cast gets stuck in an island only to find a killer among them; the only original take here is that once the twist was revealed, it all came down into something involving reincarnations and restless ghosts, a familiar theme to most J-horror. The problem though is that this reveal should have been a cake walk down to finishing a rather unoriginal yet entertaining read, but more twists came in the way, all of which involving past lives and such, and things just got very confusing. 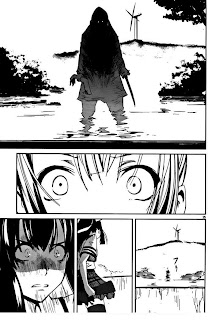 So it's a strong start messed up with a bad ending; it's one thing to be a carbon copy of everything we're familiar with from a slasher film, but to over-work a story is a no go. Though I guess it can't be all that bad as I can tell this is going to be of a targeted taste; the art was interestingly soft around the first few volumes, but it becomes more rigid as it draws nearer to the climax. This is probably because the first few acts was more akin to giving curvy eye-candy to the readers, which works at some point though seeing these gals sliced up to ribbons can be very off-putting. Some fans might find cut-up ladies to be sexy (yes, sick people), I don't. I watch and/or look at the kills in these sub-genre cuz I find it artistic, not erotic.

Pacing's real quick and each volume promises a kill or two; the murders itself are a really nasty bunch, with explosive gore and hacked up body parts focusing more on blood works than the actual viscera, which would explain the fountain-like art when it comes to blood splatters.

Some quick nods are placed in between the panels; the day the trip started happens to be Friday the 13th, an obvious nod to Jason and his bloody adventures. Alice Cooper's song "He's Back (The man behind the Mask)" which the killer listened to during a kill is another cheeky tribute to the franchise. Another slasher nod includes some character mentioning Leatherface, which I'll keep a secret to why but I'm sure you guessed it by now. (Wasn't even close though, I'll tell you that...)

Bloody Maiden is junk food manga for all honesty, but for those who're willing to try something different for their slasher needs, I would suggest a reading or two from this messy yet gorily satisfying comic. Not for everyone, but worth a shot.