Curse You, Disgruntled Lab Employee!!!: A Night To Dismember (1983) 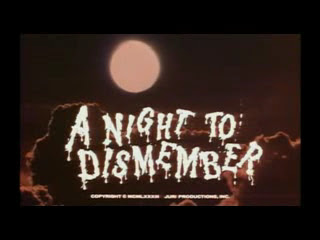 Well, do I consider myself lucky to see a rare cult classic such as this? Because I've felt nothing but a strange mix of empathy, sympathy and downright horrendous gut churning as I watch this film minute by minute.

The "story", as narrated by our humble narrator (who I would give a damn for at least helping us understand everything through this nightmare), follows a young woman named Vicki, released from an institution she was thrown into after murdering people unprovoked. Though claimed to be cured of her dementia, Vicki's bother and sister thought otherwise and believe it's dangerous to have her around, so they concocted a plan to make her crazy again so she would be sent back to the loonie bin. Things took a turn for the worst when people does start to show up dead again; naturally Vicki is to blame, but is she really the killer?

A Night to Dismember, as I've read, is a rushed and edited surviving footage of an actual full length film, saved from a fire caused by a disgruntled employee. (Who probably hated the blood and guts in this film. If that's the case, what a wuss) Now, whether these are the good or the bad parts are beyond me, but thinned down to 60 minutes should already be a blessing for me since, as I would imagine it, the shorter the film is, the more they could have focused more on what matters in a good horror film and that is to thrill and scare. Sadly, all this movie gave us were the opposite; it's a little overboard on everything as visions after visions of random shots such as mud men and a woman giving birth to a grown man are shown to us from one lazy editing to the next, some of these visions actually taken from other better cult classic films like Pieces (1982) and Xtro (1982).

Nothing really adds up, nor are they workable to begin with for that matter. For one, the choice to have the film narrated by some guy with a "Father Christmas" tone and have 5% of the film to actually contain dialogue is really distracting. Then, thanks to the shortage of footage, we have scenes that are repeated over and over again in order to give this film a longer running time. And the score. Oh God, the score! Elevator Music! For sixty minutes! OH GOD, SIXTY MINUTES OF CHEESY ELEVATOR MUSIC! MAKE IT STOP!

Now, to show at least one shred of kindness for this film, I could praise it for the gore. Cheesy as they may, the gore effects are a really messy set, but if the rest of the film is, well, rubbish? Well, yeah, no. Not worth it.

We may never know if the whole, original film would have been great or not if it wasn't for that damn fire and that damn employee, but I think it would have been better to have left it alone than create this mish-mashed ground potato of everything wrong in a horror movie. Normally, when I review a film, I take notes of its pros and cons to keep all things fair but, we all do respect, anybody who has already seen this trash can feel for me when I say: Fuck it, if you like incoherent storytelling, a lot of random shots of people's feet and lazy editing , then feel free to digest this shit hole. Frankly speaking, A Night to Dismember is one night best forgotten. For those who're eyeing on this, I think you can do better.