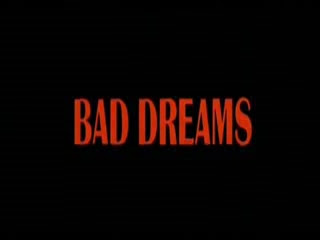 While it did felt like a rip-off of A Nightmare on Elm Street Part 3: Dream Warriors (1987) around the early parts of its story, Bad Dreams (1988) gone through enough original twists and surprises to make it as fresh as any worthy slasher can be so I am quite glad this little number has some bit of attention as an underrated gem.

Some time in 1975, cult leader Dr Harris gave his followers a gasoline bath before torching the compound in his belief that they will all be reborn in paradise, blazing all but one. A love child named Cynthia, somehow surviving the inferno, was found under the burned debris, spending the next thirteen years of her life in a coma.

Now in 1988, Cynthia finally comes through and is placed in a Borderline Personality Group to help her adjust to a new life in the 80′s. As if having no real identity and being misplaced in time weren't bad enough, she also begins to hear ghostly voices, including that of Harris', beckoning from beyond the grave to join them in death or he'll kill everyone.

From here on, the similarities with ANOES3 is evident as not only does the premise revolves around a medical center, but also features a deep-fried villain who kills whenever Cynthia dozes off. What makes Bad Dreams different is that while it displays a lot of supernatural possibilities, there's a sense of ambiguity that gives it a unique flair, going as far as defying everything that it was building-up from the very start of the film.

What I really like about Bad Dreams, looking past the fact that it's FOX studio's attempt to cash-in to a certain Nightmare Man's success, is that it's devoid of cheese and it never strays an inch from the serious mood it sets. Jennifer Rubin as Cynthia led this film with a character that's easy to relate to; she's fish out of water, all who she loved was gone and her belief was shattered. So when Harris gave her a way back to the world she belongs to, she's torn between joining her leader or stay and experience a whole new world. Obviously, she choose the latter and the undead cult leader isn't too happy about it.

Harris, in turn, is a pretty cool villain thanks to an aural performance by Richard Lynch, who gave one-liners on a more terrifying approach. His presence was more of a warning sign that something's bound to go wrong, as his belief in a hopeless material world and a better life at death was overwhelmingly influential to the film's atmosphere.

And as any slasher, Bad Dreams would have been nothing without its kills and let me tell you, the count is massive! It started with an amazing fire scene that had a number of followers burn to their deaths (with onscreen blazing goodness!) before setting off with some simpler incidents which eventually led to more absurd deaths like puree by turbine and a shocking double murder involving a car.

Any flaws to point out would be that, while the three leads (including Bruce Abbott as the psychiatrist tending to Rubin) have their own fair share of superb acting, the lesser characters failed to do much impact. But fans of 80s names would be a little familiar to some certain faces here, Charles Fleischer (the voice of Roger Rabbit) makes a cameo as Ron the doped-up pharmacist, and too Summer School (1987)'s Dean Cameron as Ralph, one of the lesser characters who actually disturbed me in one particular violent freak-out. So, technically speaking, you can easily overlook these tiny flaws, since there's more pros than cons for this part.

With a humongous bodycount, 80s flair that's fair, good acting and enough tension to keep any fans watching, I can greatly recommend this underrated late-80s slasher to anyone looking for a good watch. Just don't mind the fact that it's a Rip-Off of an Elm Street movie, cuz, out of all the Rip-Offs I've seen, Bad Dreams is by far the best!

Bodycount:
24 individuals set themselves ablaze after bathing in gasoline
1 female drowned in pool
1 female thrown off through window, falls to her death
1 male and 1 female pureed in a turbine
1 male guts himself with scalpels
1 female ingests formaldehyde, poisoned
1 male repeatedly crushed against the wall with car (dream)
1 male immolated in car explosion (dream)
1 male pushed off a building, falls to his death
Total: 33
Posted by Kaijinu at 8:48 PM