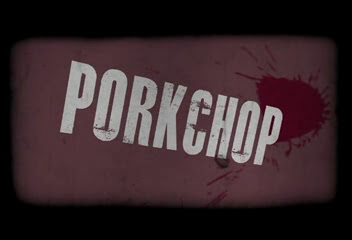 How a mess like Porkchop fell in my hands is absolutely my fault; I've been trailing for the perfect pig-masked slasher for a while and seeing this movie featured a chainsaw-wielding redneck donning porky's head seemed to be worth watching. Now budget is normally not a big problem for me so long as they can handle everything else with ease and creativity, or at least be fun about it. Well, Porkchop almost had it. Almost.

Labeled as a throwback to the 80s slasher, Porkchop opens with two young teens with plans of skinny dipping and making love near a lake, with guy uttering rubbish like "The Creature Stirs" in much low-acted sensibilities. (And yet turns his gal on?)  Not too soon, we get a spear hoisted and slashing the boy's latex face in half.

After the offscreen murder of our opening gal, we're treated to a heavy metal opening theme song specifically made for the film. (Unless you know any other songs out there that sings "Porkchop" like a National Anthem) and put us back to familiar territories: stereotyped teenagers, in the woods, camping, fucking, eating, drinking. The only thing new here is the inclusion of a cardboard papercraft a robot that's not only a wise-ass but drinks beer and is also anatomically correct.


Yes, you heard me. It even scored a gal while we're at it. 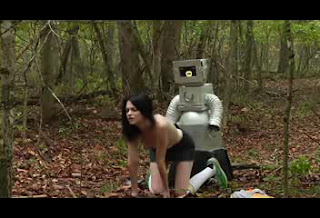 And of course we have our killer, Porkchop, whose legacy is told in typical campfire folk-legend fashion being that he was once a boy who loved, lusted and killed for a pig before disappearing into the woods. So when one of the drunken boys stumbles upon his home, our bad piggy goes to work and he's doing it with style and flair so familiar. 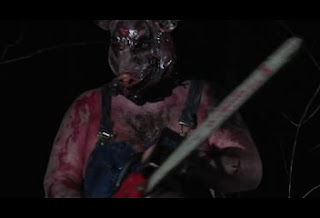 Porkchop has the so-bad-it's-funny thing going from the very beginning with intentional (?) bad-acting but as our campers go further into the woods, I begin to see all the opportunities this film missed to be anything but forgettable; it's weird enough to be satisfying and the story is easy to follow, but it also has the case of overcooked mozzarella. Some of the jokes just fall flat and sometimes venture too much into the weird. Trying to be funny isn't bad, it would have saved the film actually, but it's when they're forcing it to be funny by dousing it with enough cheese to drown a horde of rats that I'll beg to question. It's either that or the fact that the low-budget gets in the way too many times as the audio often fades away that we could barely understand what's going on, the camera tricks exposes too much of its low-budget nature (if the car's supposed to be moving, then why aren't the trees moving behind them?), or that the editing is unskilled.

Oddly enough, I managed to watch this twice, simply to make sure I understood everything that just happened but the conclusions are all the same: Porkchop is rotten, too much of the good stuff is indeed an awful thing if you don't know how to limit it, an awesome Shot on Video comes in rarely, and sexbots can appear as a printing machine made out of cardboard.

Bodycount:
1 male had his head split with spear
1 female killed with spear
1 male brained with crocket mallet
1 female gets a knife to the face
1 robot hacked to pieces with axe (if it fucks, I'm counting it...)
1 (pregnant) female gets a chainsaw to the arse
1 unborn baby falls from from mutilated womb
1 male gets a dart thrown to his head
1 male set ablaze
Total: 9
Posted by Kaijinu at 7:16 PM