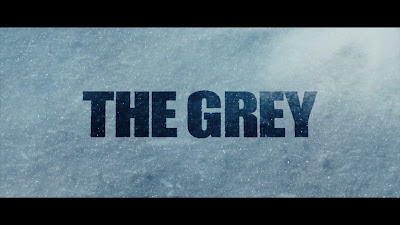 Trading away highly explosive action for something truly terrifying, actor Liam Neeson ventures off to Alaska as John, a hunter tormented by his personal demons, ready to end it all one day with a shotgun to his mouth, but stopping mere moments later to do his job as a paid wolf killer.

Moving back to civilization the next day, John's plane crash landed from what appears to be an engine failure, killing all but seven passengers. What comes next is a fight to survive not only the harsh surroundings of the icy barren Alaskan mountains, but also a pack of wolves who sees them as intruders.

Seeing Ridley Scott had something to do with this (he only produced it), and marketed as a "Companion Film" for Christian groups, what got me seeing The Grey was the fact that one description of the film had something to do with wolves being slashers. Now I know wolves are very territorial, I don't think they're violent enough to be compared to masked maniacs and giggling psychos; then again, I watch a survival-horror flick to see a guy get mauled by a wolf rather than discuss facts.

What I like here is it's actually more of a "Companion Piece" to survival horrors, only slightly better, and gory. It builds a lot from its main character; John (Liam Neeson), our protagonist with much complexity in his role that he's very easy to root for and his cgarcter intriuges us. The six others including John Diaz (Frank Grillo), Talget (Dermot Mulroney) , Hendrick (Dallas Roberts), Burke (Nonso Anozie), Hernandez (Ben Bray), and Todd Flannery (Joe Anderson) took turns to show a little about themselves, albeit some are one-dimensional and/or killed off pretty soon by the wolves.

Speaking of which, the wolves was this film's second main dish. What they said was right, instead of crazy pickaxe wielding madmen or uber-ugly inbreds hunting them down, the film choose a more realistic (at most) threat; wild wolves, whose eyes shine in the dark  with much eeriness in it as well as viciously attacks them at a realistic nature, with no over-exaggerated moments, no limbs ripped off, or head torn off, just plain, terrifying and, thanks to a lot of jump scenes, shocking attack up to the next.

While not running away or fending off the wolves, the cast are also pitted against nature and its ticks, from blizzards to river currents, which took a good toll to them, and looked great with top-notch cinematography that added the film's needed tension and atmosphere (That and it's awesome in widescreen!). What makes this a little different from any other survival scenes is that it took its time on it, instead of rushing it in a high-thrilled action scene, making us feel the situation rather than just see it. There are also some comic reliefs, which are thankfully not too off-place, and a lot of heart-aching moments such as a dying man's panicking during some of the earlier scenes and, what I think will stand out the most, John cursing to God, which is incredibly well acted and moving.

Its flaws were more on, other than the poor characterization of the rest of the cast, some of its predictability; I don't need to be a genius to know that the man coughing so much will die in his sleep, or the fact that rope will snap. Another is that it made a weak attempt to philosophize nature and God, that hardly made a dent. I saw more thought-provoking theologic ideals in John Carpenter's In The Mouth of Madness. Aside from this, there's also the ending, where after all that build-up, just when we're about to see Liam grapple with the Alpha Male wolf, hunting knife and broken bottles taped at his hands, it did us the whole cliffhanger thing and left a lot for us to think about, unless you count the post-credit scene as its final conclusion. (There, I said a spoiler!)

So far, 2012 had a lot to answer for us when it comes to horror flicks. Last Month we saw Hostel 3 step down from it's torture kicks, last week I saw Hellraiser Revelation "reveal" that they had no more ideas left and New Pinhead overdo his mystique, and yesterday I just saw Victor Salva's mediocre, though entertaining, mini-effort Rosewood Lane. Seeing The Grey was a Godsend for me; at last a well-acted, well-produced and decently decent survival-horror that's both an emotional journey into God's and Nature's lowest and a thrill-ride for survival. So tape that Knife and broken bottles to your fists and see this flick when you can! I highly recommend it!