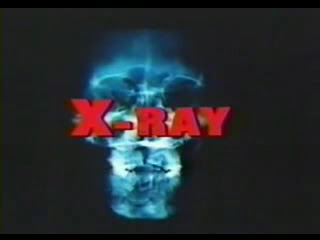 You'll never know how good or how bad one movie is until you tried it is a statement I often live by when it comes to watching slasher movies, may it be old or new. So despite some hate terrorizing this film, I decided to give X-Ray (or more Hospital Massacre, depending on the release) a run for the sake of experience.

We start the film with two kids, one of them being Elizabeth Hoy who slasher purist would recognize from the early 80s killer kid slasher Bloody Birthday (1980), alone in a house during Valentines Day, playing a game while a boy sneakily leaves a love letter in front of their home. It looks like the boy isn't that popular, though, so young Susan Jeremy (Hoy) rejected the letter upon finding it, laughing at the gesture before going for some cake that she and her brother can share. Cheers turned to screams when she hears a struggle back at the playroom and discovers her brother had his neck broken against a hat rack (!), with the culprit kid giggling away.

So now that we established a loon and a great - albeit badly acted - opening, we then move 19 years later and have Playboy cover girl Barbi Benton as our grown-up Susan visiting a hospital for some check-ups. But out of an odd chance, said hospital also happens to be unknowingly victimized by a loon giggling in the same manner as the killer tyke at the opening, placing forged medical results to ensure Susan gets isolated in the hospital to give him a chance to finally do her away. With so many red herrings and possible suspects, it's only a matter of time before we figure out who or which one he is among the crowd and Susan will have to face the terror of a psycho in a doctor's gear along the way.

Slashers are always known to throw away logic out of the window, but X-Ray done it so mindlessly, it's crazy fun! Where else can you see the ex-playmate nearly strip away and gets gratuitously examined in lovely close-up with a stethoscope? (Though, the curved posture of her back is very distracting) Or would give up the possibility of a single 10-year old boy managing to hoist and impale another in such speed and near-stealth?  Only a film as crafty as this can make anything that illogical to be tolerably laughable. The kills, while at times tame on gore, also have their creative sense. From acid submerging to stethoscope strangulation, it looks like our maniac can think one or two ways to make anything lethal as he works his way through the staff, accompanied with Omen (1976)-esque scores that got me feeling like I'm watching a cheesier version of Halloween II (1981) minus the gloomy feel and with added popcorn.

While not really the best in, well, anything technical, X-Ray, AKA choose one of the other titles this film went by, is so inept that its so good in a half-baked manner! Yes, the film looks grittier than a ten thousand year old Hustler magazine and, yes, the scripting is chock full of ham and cardboard characters who will just die in the next minute, but in terms of being an evening's hour and a half worth of entertainment for any bored fellers out there, this movie has enough sleaze, gore and plain tolerable stupidity to keep a beer frenzy happy.

X-ray is definitely just for fun. No point of trying to get some sense in here, just go with the flow and enjoy the mindlessness cheese while you can!

Bodycount:
1 boy hoisted and had neck broken against a hat stand
1 female knifed to death
1 male had his face dunked into a sink full of acid
1 female knifed to death
1 female strangled with stethoscope
1 male beheaded with surgical saw
1 male gets a hatchet to the head
1 female gets a lethal injection to the face
1 male stabbed through the neck with surgical saw
1 male set ablaze and fell off a roof
Total: 10
Posted by Kaijinu at 6:46 PM