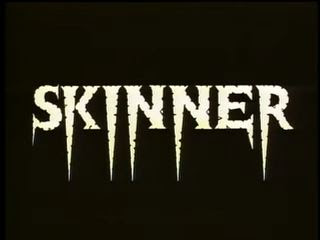 Dennis Skinner is a drifter who always travel with a bag full of clunky metal tools. During one of his travels, he came upon a house renting out a room for some extra income and befriended the owner, a lonely wife named Kerry Tate. Though his presence puts a strain to Kerry's already rocky relationship with her husband Geoff, Dennis simply minds his own business, working as a janitor at a local factory and, as a hobby, moonlights as a serial killer who flays his victims and wear their skin as clothes.

Preying on hookers and despised co-workers, Dennis' bodycount rises, unknown to him that his first and only surviving victim, a morphine addicted junkie named Heidi, is hot on his trail and hellbent on finishing him off for good. Its only a matter of time before Dennis, Heidi and even Kerry's lives intertwine, resulting to a strange and bloody situation.

Taking cues from slasher films like Maniac (both versions) and Don't Go In The House (1981), Skinner is a mid 90s entry to the sub-genre that, like the aforementioned titles, focuses on the exploits of its villain rather than a certain character or a group of would-be victims. Much of these kinds of horror flicks normally rely on the portrayal of their monster and I am glad to say that Skinner does not disappoint; Ted Raimi, the brother of Evil Dead (1981) director Sam Raimi, did a fantastic job bringing out the quirky madness that is Dennis Skinner, a man traumatized by a horrific childhood incident that involves one of his family members being skinned. Not only does he have the look of an average weirdo, but Raimi's portrayal for him had an air of charm that makes him a likable guy until we find out what he does whenever he is alone with a potential victim.

The character's obsession with skinning victims was quite amusing from the fact that the execution of this concept came off rather cheesy and features a lot of hokey-looking effects, a little guilty pleasure of a charm that hits my funny bone and intrigue right. Thankfully, the bleak direction and urban jungle backdrop maintains the horror with an added nightmarish feel, as well as the fact that many of the casts that we are supposed to root for are flawed and barely redeeming. (But not portrayed incompetently, mind you; Traci Lords and Ricki Lake deserved some recognition for their roles) If anything, Skinner not only showcases horror under the form of a serial killer, but also of personal demons and real life challenges such as addiction, unfaithfulness, and poverty.

Sadly, as much as it is effective as an atmospheric serial killer flick, the marketed gore is really no more than a bunch of off-screen and/or implied killings. There's only one scene where we did get a good flaying but from what I heard, you can only catch this if you got the uncensored version. This can be a big disappointment for gore hounds, but for those who prefer stories rather than grue might get something out of this, though the end might leave you asking what just happened and/or if that was just it?

Personally, I can overlook these little cons in favor to what this movie offered best: great performance and a strange story. Underrated and overlooked, Skinner deserves another round among the slasher and serial killer fans of today; that being said, don't miss this one when you get the chance to see it!