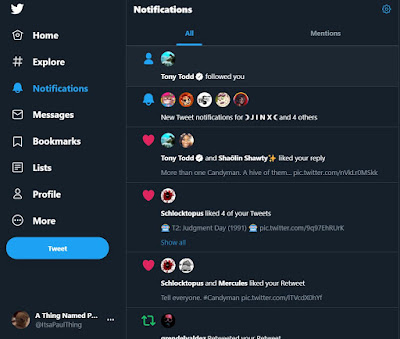 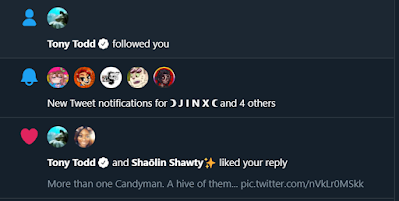 Opera (Italy, 1987) (AKA "Terror At The Opera")
Rating: ***
Starring: Cristina Marsillach, Ian Charleson, Urbano Barberini
In a way, I understand the cult following this late 80s Dario Argento giallo made for itself as the film is a lowkey mad masterpiece visually, but this isn't to say I have my own set of reservations about it.
Taking cues from Gaston Leroux's The Phantom of The Opera, the film sets off when the leading lady of a production of Macbeth gets into a car accident after ranting about the opera's experimental direction. (Apparently she's not a fan of ravens. Or laser beams) This leads to a young understudy, Betty (Christina Marsillach), to step into the role, something she's not entirely thrilled about as she sees this as an omen of terrible things to come. The Macbeth curse, if you may.

And surely enough, as Betty sings her part that night, we see a gloved individual sneak into one of the closed off opera boxes to get a better view of the show and we know this creeper is up to no good when they start to reminisce about that one time they attack a woman while another is bound and forced to watch. Their little impromptu private viewing gets interrupted, however, when a staff finds them, leading to the gloved fella to brain the man dead against a coat hook, their struggle causing a set of stage lights to go hurling down.
Despite this fiasco, the show is a somewhat success, much to Betty's and the rest of the production team's delight, though the incident with the lights did lead to the police and an attending inspector to investigate and find the murdered staff. Freaked out by this, the young starlet opted to cool off by hanging out with her stagehand boyfriend and make love with him at his apartment later that evening, only for it all end with Betty getting tied to a pillar and have pins placed under her eyes by the gloved and now-hooded prowler, forcing her to watch them brutally dispatch her lover before simply cutting her loose and exiting the scene.

In shock, Betty wanders off into the rainy night and gets picked up by the production's director, Marco (Ian Charleson), who happens to be driving by. As she confides with him of what just happened, Betty also vaguely recalls a nearly-forgotten childhood memory of the same hooded killer murdering her own mother some time ago, which may mean that the killer knows her and it won't be long before they target her once again, killing anyone who gets in the way.

By the 1980s, a decent lot of Italian giallo films start to resemble less like crime pulp fiction as much of their focus swayed more on keeping up the splatter and kill count high, a response towards the rising popularity of American slashers around that decade. This is evident in Opera's vividly bloody murder set-pieces, which is undoubtedly among director Dario Argento's most memorable contributions in giallo horror for their nightmarish nature and strikingly creative execution. While not overly gory, the bloodletting is generous and the attacks are simply ferocious, done with the key extravagance of a creative eye only the likes of Argento possess as his signature visuals of color tints and expressive camera work make their way into brutal close-ups of a stabbed jaw or an amazing gun murder involving a slow-mo shot of a bullet going through a door's peephole, through an unfortunate victim's head and finally to a nearby phone, destroying it.
What doesn't work, however, is the overall quality of the film's mystery; with the way the plot flows through its run, Opera indefinitely shows little care about the suggested whodunits as there are hardly any police presence and very little of the characters introduced got any further development than a single (and often strange) note. (Though, I got to say I love the fact that we never saw the original leading lady's face. Makes me chuckle for reasons) This meant that our killer could have been anyone among the crowd, which cheapens the story halfway into an exploitative slasher flick, all the way down to its ridiculous climax of using vengeful ravens to out the killer and a mountain of mad ramblings and expositions in an attempt to piece things together and look smart or dramatic.

I'm also not a big fan of some of the murders being clashed with heavy metal for what I take is symbolic chaos. It's too obnoxiously on-the-nose and it just doesn't work for me, but even that's vanilla compared to my biggest gripe about the movie; you see, Opera could have ended in, well, the opera, as Betty is forced at gunpoint by the killer to enter a room filled with paperwork. The killer ties her up, locks the room and douses everything in gasoline, intent on ending both of their lives in what's best described as a lovelorn murder/suicide. A fire broke, an intense escape happens and then we're suddenly in the alps. The fucking alps. Weeks later. Without spoiling much, we have ten to fifteen minutes to spare (depending on which release you got), the killer is still out there and then we're treated to one of the most convenient endings I've seen in a giallo, ruining whatever gruesomely gothic atmosphere this movie had before we're in the fucking alps.
Opera is as standard as any late 80s bodycounter is and I'm willing to accept it as a flawed cult classic seeing all the best things about it is undeniably enjoyable. what it lacks in intrigue and a satisfying ending, it makes up with an eloquent aesthetic and carnal display of brutality and madness. See it if you like and maybe you'll enjoy it enough to compel somebody else to see it, hopefully without taping pins under their eyes...
Bodycount:
1 male repeatedly beaten against a coat hook
1 female killed, method unknown (flashback)
1 female killed with a dagger (flashback)
1 male gets a dagger through the throat, stabbed to death
1 female strangled, stabbed in the chest with a pair of dressmaker shears
1 female shot through the head
1 male found knifed in the gut
1 female mentioned strangled
1 female shot
1 female found knifed on the chest
1 male knifed to death
Total: 10
Posted by Kaijinu at 10:30 PM No comments:

Eulogy For Euphoria: Sound of Violence (2021)

Sound of Violence (USA/Finland, 2021)
Rating: ***1/2
Starring: Jasmin Savoy Brown, Lili Simmons, James Jagger
Remember back in 2013 when Canada introduced to us Discopathe? That trippy slasher movie where a guy is somehow triggered into mad serial killings whenever he hears disco music? Well, this Finnish-American production explores a similar aspect of musical madness, albeit on a more psychodrama approach with a small taste of exploitative murders ala SAW sequel-inspired machinations and sonic-based body horror.
The scene begins in 2002, as we watch ten-year old deaf girl Alexis finds her PTSD-suffering, Vietnam vet father in the middle of butchering her mother and brother with a meat cleaver. She strikes him dead with a vengeful swing of a meat tenderizer, an act that not only miraculously restores her hearing, but also makes her experience a euphoric sensation unlike any other.

Now as an adult, Alexis works as a music teacher’s aide and is deeply interested (or, rather, obsessed) with experimental music. She hides her past well enough, though she still longs to feel that same sensation she felt during the night she murdered her father and, with her deafness apparently making a haunting comeback, Alexis sees herself growing desperate to replicate that high. She soon piece things together that the sound of pain is what sparked both her hearing and the otherworldly euphoria, thus setting her plan to explore the joy of pain-based music and create an orchestral masterpiece out of the suffering of others.
Less of your typical paint-by-number bodycounter and closer to a descent-to-madness character study, Sound of Violence (2021) tackles the meaty subjects of re-occurring childhood trauma and creative addiction behind the sympathetic eyes of a troubled individual slowly being consumed by her commitment to an unexplainable elation. It is an idea that's handled in a manner that gives our main character an intriguingly solid motivation and, with the source of her needed jubilation stemming from torture and death, this ingeniously gave the film ways to ensure the finesse of the narrative doesn't overshadow the horror-tainted entertainment value of the film.

Working well with this approach is Jasmin Savoy Brown's performance as our disturbed yet inspired murderous musician Alexis Reeves, giving the role a sense of normalcy at first rather than overworking the brooding psychopathy head on. This hands us a window to look into and understand the situation our soon-to-be killer finds herself in and what she's going through because of it, as everything she built for herself gets threatened to be taken away by fate unless she does something drastic about it. This, of course, does not excuse her for the murders, but we see her plight and genuine remorse after each deed done, thus we couldn't completely paint her as a monster but, instead, as someone who is sincerely losing control of her own life and is willing to do the extreme to keep whatever good left she sees in her life.
Said extremes are the horror aspects of the plot, wherein Alexis pushes the boundaries of her mental stability, as well as the warm living flesh of her victims, just to feel a sensation of color and lights that's never really explained. People, in turn, gets kidnapped, tricked and/or drugged into participating in her symphony of pain and torment, resulting to outlandish deaths and murder scenarios including a chair rigged with moving knives and hammers that syncs up to a synthesizer keyboard and a plot involving drugging a harpist into playing a harp with razor-thin strings. At times, the extravagance of these murder scenes clashes with the implied seriousness and drama of the story (wait til' you see the beach finale. The cheese levels were a little high there), but it does help put Sound of Violence on a more memorable light as a horror feature and it doesn't stray away too much from the tone of the movie.

If there will be anything I could nitpick about this film is that the fact it felt lacking on some parts introduced, like the police procedural that's more of a red herring than an actual plot point with how little time we get to spend with these scenes and how flat they are whenever we do get them. I do get much of the focus is supposed to be through Alexis' perspective, but these procedurals had enough appearances to warrant some form of conflict, but alas they're just there to imply somebody is made aware of the bloody mess our killer's leaving behind and that's it.
Still, I see a lot of potential from this movie to be a B-flick favorite for those who love their horror weird. It's undeniably posh in some parts, but it has enough madness and bloodshed to satisfy a horror hound's craving for a modern psychodrama!
Bodycount:
1 female and 1 boy found hacked to death with a meat cleaver
1 male brained with a meat tenderizer
1 male hit by an incoming car (flashback)
1 male stabbed and beaten to death in a weaponized chair
1 male had his head cooked with electric shocks through theremin-rigged electrodes, explodes
1 male bludgeoned to death with a sledgehammer
1 female had speakers ran through her body via impromptu surgery, dies from her wounds
Total: 7
Posted by Kaijinu at 1:38 PM No comments: