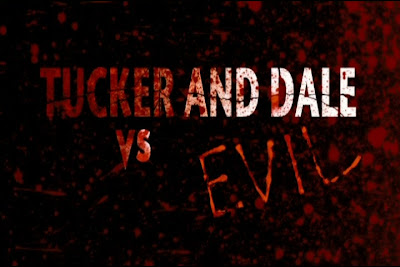 By far the sweetest slasher film I've ever laid eyes upon, Tucker and Dale vs EVIL has a lot going from charming leads and crazy characters to hilarious deaths and one awesome killer "college kid".

Opening with a handheld camcorder's POV, a news crew ventures upon an abandoned barn ala amateur snooping only for the anchor and cameraman to get killed by who appears to be a mad man with a gnarly burned face.

Travel back three days prior, we follow a group of partying "college kids" (love that term!) stopping at a gas stop to load up on fuel and beer, as well as encountering two hillbillies, Tucker (Alan Tudyk) and Dale (Tyler Labine). After a misunderstanding that leads to the kids believing Dale, scythe at hand and giggling like a moron, is a raving maniac, the two group went on their separate ways, with the kids heading to the lake and the bumpkins riding to a run-down wood cabin which they plan on renovating into a summerhouse.

That night, as the teens share the typical campfire tale of killer hillbillies massacring partying teens, Tuck and Dale go on fishing nearby and sees one of the kids, the lovely Allison (Katrina Bowden), slips from a jump and nearly drowns in the lake. Dale swims in to save her and takes her to their cabin so she can rest, a gesture Allison came to like and quickly befriends the two country folks in gratitude.

Unfortunately, this simple act of good intentions leads to a series of further misunderstandings and fear-fueled actions, as the rest of the teens try to "save" Allison from Tuck and Dale and, in process, somehow ending up dead or dying from a bizarre series of accidents. Let's just say, things aren't getting any prettier by the minute for everyone, not with Hillbilly hating Chad (Jesse Moss) leading them to their dooms.

For so many years, we've been bombarded by tons of Hillbilly horror from the mainstream cinematics of Deliverance (1972), to underrated names like Southern Comfort (1981), to the basic slasher killer tropes ala Madman (1982) and even the latter Texas Chainsaw Massacre sequels. What Tucker & Dale vs EVIL did with this Hicksploitation, however, was give it a good eye as a social commentary, turning tables at the usual stereotypes and showcase us dirty hillbillies to love and a set of teens to fear for a change, all of it wrapped in a genuine romantic-comedy take on a backwoods slasher in the vein of Shaun of The Dead (2004).

It's easy to point out this film's highlights; aside from the charming portrayal of the three main leads, every performance is just awesome and no character is dull or annoying. Alan Tudyk and Tyler Labine all got their act right, giving us a lovable duo that echoes the likes of Simon Pegg and Nick Frost's characters from Shaun. Same goes for Katrina Bowden as while most of her appearance had her knocked out for a momentous amount of reasons, she plays her character strong and caring enough as a persona trying to hold the peace between hillbillies and friends. The rest of the teen casts are done as unlikely foes, though they're not bad enough to hate all through out and they still provide many laughs as exploits to the usual teen victim stereotype of "dumb and horny college kids". Only Jesse Moss' character stands up as an unlikely yet cool villain. He plays a teenager who grew up hating hillbillies to the point of calling them "pure evil" and, in an unfortunate turn of events, transforms into this super cool slasher psycho that I'm glad to nickname "Burn Face". You can say seeing him rise up from the smoking remains of what was a house, roaring, won my approval of him as a villain.

Another factor that got me liking this movie were the kills; you could say that it's a slasher-less slasher thanks to the copious amount of "accidental" kills, such as tripping into pikes, running through an uprooted tree and the messiest woodchipper dive, but thanks to the comical nature of these kills, as in watching the two hillbillies react in disgust and horror as they watch all of happen right in front of them, is snorting-laugh material for me. That, and "Burn Face" Chad putting up a nice chainsaw fight with the "intimidating" Dale.

The script is also pure comic genius, littered with one-liners that parodies a lot of horror concepts and it literally pokes fun on these ideals which we all got so used to. One scene actually got me laughing so hard, I choked on my spit; after accidentally sawing through a hive of angry bees, Tucker suddenly runs out, wielding his chainsaw ala Leatherface, frightening (of course) the teens into scurrying. Seeing how they turn an iconic horror scene to a weirdly "common"  situation like that really caught me and my funny bones off-guard.

But what I really like about the film the most is its warm and very campy nature. It's gruesome in terms of splatstick material deaths, but the overall effectiveness of the film was more on it being a romantic comedy than horror. There's more care than hate. More kindness than meanness. Heck, the teens' attack on the Tucker and Dale was more on saving their friend from what they thought were evil people. From this, you can tell this is a twisty kind of feel-good film, which may or may not be such a bad thing, leading us to my next point.

The effectiveness of Tucker & Dale vs EVIL relies a lot on people's taste because frankly, it's a genre movie at first glance and it's bound to bare some criticisms. Some may point out its predictability, while others would criticize the jokes. Plenty would complain the ineffectiveness of the film's genre blending, but personally, it works and I'm a weird-enough guy to love the weird and wonderful, so this is no exception.

It's a weird choice to suggest as a Valentine movie but, yeah, if you have a good gal or guy with a morbid or, at least, a good sense of humor, try cackling with them at this gem. Tucker and Dale vs EVIL is bound to cause some winces, tickle some funny bones, and melt a few hearts.

(In case yer wondering why I sometimes spell "evil" as "evol"? Cuz it's a play on the word "love". Cheesy, but for Bloody Valentine week, I'm super cheesy!)
Posted by Kaijinu at 1:44 PM