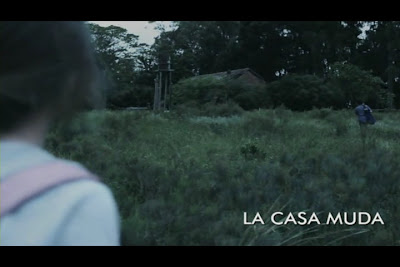 Horror movies are now taking a stab at gimmicks once again. When remakes had gone or going stale, they jumped to 3D or found footages. As I laugh at this clamor of desperate attempts to keep the industry exciting, it also occurred to me how this could affect the horror industry. Found footages seems to be the new hype on horror, but with a distinctive gimmick that only a few could perfect and a few could love, it's a tall order to make one so perfect. However, the style did seeped through the cracks, and somehow influenced a few "straight" horror genres such as this 2010, Uruguay thriller.

A single-take feature that had the format of a found footage, without the twitching and the shaking and the whatnot, with the film focuses on Laura and her father, Wilson, settling down in a cottage up for sale, but in need of repair. spending the night there and repairing it the following morning, it seems to go regularly until a noise woke Laura up, and it's coming from the house. As she and her father investigates, they find out that they're far from alone.

I don't really buy their gimmick that it's one continuous shot as i can see one or two opportunities for a quick edit. Coming in cross between Hitchcock's Rope and The Strangers, The Silent House's elongated narrative is no more than one long stalk scene between Laura and a home invader who just murdered her father. We spend the entire time watching her hide, run and cry in the darkness, all the while gong through some haunted house antic that comes in the form of a ghostly visage of a small girl. Who this girl is is slowly (and I mean slowly) revealed through the series of attacks and chases while in the mean, the nyctophobic elements of the film and, too, the brooding tension a worthwhile thrill.

The gimmick is refreshing despite already done, but its boring most of the time and the lack of any other interesting bit felt the film agape for its tension. With very little victims to go around and the kills occurring in the dark, there's nothing this slasher is rooting up from all this other than the revelation, as in my take, would have been better as a short film.

However, with all the darkness going on, and the suspense building in each scene, The Silent House is still a watchable take for the patient kind as well as those who're looking for something different. If one's a fan of found footage film or movies like The Strangers, Them (aka Ils) or any other titles that had victims fight for survival, Silent House's sui generis approach would probably be your taste. Albeit taking place in near shadows and in near silence, the film had a crisp look and much attention to detail. The twist in the end's a little confusing, but an extra post-credit shot and a montage of photos may shed some more light to it. I got to admit, I was expecting something preferable, but a twist is a twist, and being a simple one at that, I can live with it.

It may be impaired with clichés commonly found in slashers and haunted house movies, but for the most part it plays as an effective thriller and a slightly welcome breath of fresh air to the genre.

bodycount:
1 male slashed on the neck with sickle
1male hacked to death with sickle
total: 2
Posted by Kaijinu at 8:55 PM