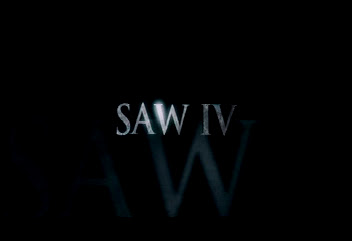 So John Kramer is dead and he appears to have taken everything with him to the grave. From the rusty traps to the grieve stricken prodigy. So it's all over, right? 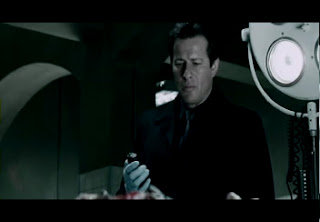 No, apparently. Not for us and especially not for plot.

So looking back at the franchise so far, three movies and one dead mastermind doesn't spell out finale and this entry takes us to another series of new twists on the mythology and a legacy that refuses to die.

Continuing from the somewhat disappointing ending of SAW III, John Kramer's publicly announced death brings out a sigh of relief to the stricken public until, that is, a SWAT commander who worked on his case gets forced to play a new "game" to save his family. It soon becomes clear that Jigsaw had more than one accomplice and an unwilling player might be going through his own initiation to be a part of the Kramer legacy.

Albeit still having linking plotlines to the previous entries, SAW IV tries to move back to a more mystery driven plot as the fact that both Jigsaw and Amanda are dead meant a new puzzle is at hand here waiting to reveal who is perpetrating these traps.

So while we enjoy a moderately intriguing thriller, gorehounds will be equally satisfied with the new set of Jigsaw traps that scalp, puncture and dismember its unfortunate victims with much bright red to the point it finally pushed the franchise to true torture porn territory. This being mentioned, SAW IV also marked the franchise's slowly disappearing realism as the traps gone more elaborate if not overdone, with measures of complexities that are a tad too big to ignore. Note, one of them just so happens to be in a locked room in a sleazy motel. It looked like it weighs about ten tons and it had two spiked claws. How a machine that big goes unnoticed or the fact that nobody accidentally used that room is beyond me. For short, it's pure torture show that's made for grue-lovers and not entirely for people who have a serious take on their genre films.

Another problem I see with SAW IV is that, while it attempts to bring a new chapter in the series, it's still trying to cover the continuity between previous films and it's beginning to get more and more confusing unless you rewatch the previous titles. At least two to three characters from prior SAW movies make a comeback and while series of clumsy flashbacks do help explain who they are, it's weakening the flow of the story. Then again, whether they were major characters before didn't matter much as the film's focus is more on the lead's journey to what may be his initiation rites, which is at least watchable and entertaining for what it is.

Marking the SAW series' first step into the peculiar legacy that concerns continuing Jigsaw's works beyond death, SAW IV at least has the decency to try a proper story and an interesting backdrop in its mythology. What will happen next will come far estranged and more disappointing so might as well enjoy this entry if you're at least craving for something gory.