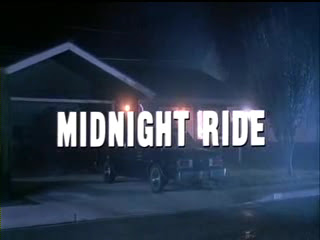 At one California night, housewife Lara leaves her workaholic (and currently handicapped) policeman husband Lawson as she sees their marriage's going nowhere. As she drove through the barren roads, Lara meets Justin, an eccentric hitchhiker with a personality of a little boy and the two nearly got themselves killed when Lawson catches up and chases them into crashing their car. 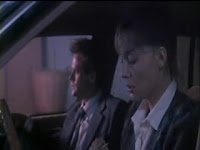 Miraculously unscathe, the two makes their way to a nearby gas stop where Lara calls her sister to pick them up while Justin goes to confront the place's rude manager, returning later with a plucked out eyeball as, it turns out, Justin's an insane psychopath giddy with the thought of murder. Worse for Lara is that she's his new plaything and with a knife pointed to her neck, she's about to experience the longest midnight ride of her life... 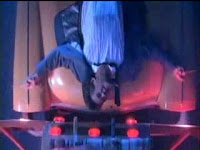 An overlooked worthy attempt of a hybrid, Midnight Ride rings a plot similar to The Hitcher with added cops-and-robbers antics and a really cool villain; while it may lack any credible story or any believable character as everything here's tailor-made for thin scripts and disposable casts, the fast-paced direction and action scenes kept the story going as a brainless fun fright flick. 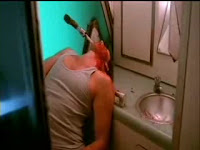 A fine example of this includes a part when Justin and Lawson meet, not knowing of each other's connection to Lara, ending in a gut-wrenching murder attempt involving Justin tying up the cop on the hood of a car and proceeds to slam it repeatedly into the rear end of a gas tanker. How the gas tanker fail to notice what's happening behind his truck may never have the chance to be explained, but it's intense for the sake of intensity and the movie energetically embraces it.

Slasher fans would probably get their kicks from this one as it features one nasty lead villain played by none other than Star War's Luke Skywalker actor Mark Hamill, as a creepy immature hitch hiker doing rather bloody good murders and, keeping in nature of the film's action hybrid, some decent car stunts. In fact, the climax also features a lively grapple that is more in vein of the rock and sock brawl-out that almost every action film had done, this one taking place in a hospital which apparently (and hilariously) hardly matters since none of the orderlies save a hostaged doctor seem to notice. 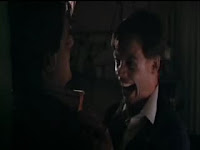 There's a hint of creepiness in some sequences thanks to some atmospheric lighting but the film's ridiculously over-the-top set-pieces worked over it, which may or may not be a bad thing depending on how you like your action-slasher hybrids. It could have done something more menacing for a slasher movie though, seeing there was a possibility of having two possible threats (the husband and the psycho) working their way into the plot, but with the sudden change of direction from slasher horror to action thriller and Lawson turning into a hero by the second act, the finished product is undoubtedly running a little behind as a scary "serious" movie but it's still a watchable effort.

If you are lucky enough to catch obscure high octane fright flick, you can take my word; this is mindless popcorn movie that's big on cheesy taste and gut-punching fun!

Bodycount:
1 female had her eyes gouged out
1 female gets a throat cut with a switchblade
3 females immolated by incoming car
1 male killed, clothes seen
1 male found stabbed on the neck with a gun's nozzle (!)
1 male killed in car collision
1 male shot
1 male stabbed on the gut with switchblade
2 males decimated in gas explosion
1 male seen shot in the head
1 male shot on the head
Total: 14
Posted by Kaijinu at 4:12 PM