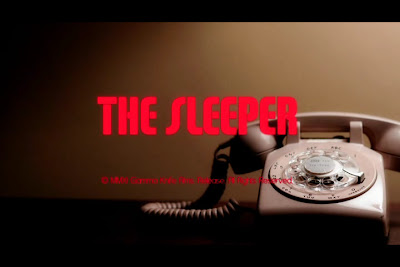 Who is this Justin Russell? So far I only saw two films under his name and I'm already impressed of his "grindhouse" movies! While his Death Stop Holocaust is a steady paced,70s horror-inspired thriller, his new "hit", The Sleeper, is a full-blown 80s slasher tribute!

Opening in 1979, a girl in the Alpha Gamma Theta sorority house was preparing for a goodnight sleep while unknowingly being watched by a gloved figure. As soon as she snuggles into her bed, said figure smashed her face in with a hammer.

Two years later, new pledges are taken in including one Amy who just moved in campus; while a little skeptical at first, the girls soon warms up to the sorority as they partied their nights away! (Watch out for the groovy  disco scene that caught me dancing to the beat. Yes, I'm an old fashioned guy, so sue me!)

It's supposed to be all fun and games if it wasn't for the creeper caller that kept phoning the house, a milky-eyed giggling psycho of the title who enjoys making obscenities and the occasional death threats; first dismissed as a tasteless prank-call from one of the girl's boyfriends, the Sleeper soon starts picking off the girls one by one, keeping track of his kills by crossing out photos with a red lipstick. When the boyfriend of one of the girls starts to worry about his gal's sudden disappearance, he phones a local detective for help. But can the police find the Sleeper in time before he gets everyone? It's 1981 and the cold snow is forever. Get ready for a bloody night you will all remember...

Everything from the gritty picture quality to the 80s influenced scripting, The Sleeper took Black Christmas and Prom Night inspired situations and hand-tailored a slasher film that almost befits the year it's supposed to be in. Technically, it's one hammer murder to the next with a steady pacing to keep the story flowing with enough characters and filler situations to keep it from having a dull moment.

Other than that, there's nothing really new here; if you know your slashers, you can expect a lot coming from this only, unlike many who attempted the same throw, The Sleeper did it all in two weeks in around a budget of a few ten thousand dollars. Yes, that's a minuscule budget put to a creative use recapturing the Golden years of this fair and complicated sub-genre.

While at times you can tell the low budget from some scenes including a few questionable practical effects (a fake head is obviously a fake head in one decapitation scene), it's still a surprise that the technical elements of the film is well handled from some great lighting, synthesizer scores that screams retro, and not a hint of CG anywhere! Gore quality ranges from faces bashed in or ripped off, throats ripped open, and enough of hammer bludgeoning to keep fans happy. The best part about this is that it gets better with each murder. Though I still wonder how a hammer claw can slit a throat but it happened, staying true to the logic-defying halcyon days of 80s slasher cinema.

With that, any other highlights would be on the obscure killer this film featured. The Sleeper wasn't really fleshed out much; he's there and he's killing people for the sake of putting them "to sleep" (forever), and nothing really backs up his purpose. He's like Billy from the original Black Christmas or even Micheal Myers on the first Halloween movie, using phone calls and heavy breathing to toy around with the girls, and being a "faceless" random loon who somehow evaded capture for a long time. Sadly, I can't really say much for the rest of the cast; in my view they're your standard 80s victims minus a few stupidity and is almost natural in reaction. Though that didn't stop some of them to just sit and scream as a killer hammer down a door. There's always THAT victim.

So, with all that, we finally have our next "Ti West"; just as West got the 70s exploitation in pitch-perfectly recaptured with his House of The Devil, Russell's 80s inspired slasher flick is enough to tell me this guy has a future in horror. If he could do all of this in a measly ten or thirty grand, what more if he could bag some bigger cash? For now, I can safely recommend this awesome slasher, especially for those who got a knack for the good old days.