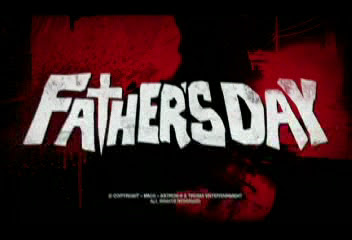 I honestly never understand the fan following for Troma movies. I mean, yeah, these films are shlocky cheese-fest with lots of taboos and violence. I'm up for blood and guts any day, but there's a limit to how dumb a film can be for me to enjoy. Perhaps I'm saying this because I grew up watching "high-class" horror flicks released by big names like Dimensions, New Lines or Paramount, or even half-decent releases from Full Moon videos, but I have enjoyed some Troma releases such as Mother's Day (1980), Blood Hook, Klown Kamp Massacre, Dead Dudes In The House, and the list can go on!  So, I'm theorizing that any films not made by Troma but released by this company would surely come half-way decent, hence why I have subjected myself to this so-called tie-in film to Mother's Day called Father's Day, eager to see if Troma can change my perspective of them.

Seeing this is a Troma film, I kinda saw some of it's signature cliches dead on from far away: fat guys, ultra-violence, cheesy lines, awkward jokes, taboos ranging from gay jokes, rapes, cannibalism, incest, religion and so forth, but at least for the first hour or so, they made it with the nature of a pure 70s exploitation flick, with an Ahab named, well, Ahab hunting a notorious father serial-rapist/murderer Chris Fuchman. It's a vendetta Ahab is holding against the seemingly uncatchable monster after Fuchman murdered his father, left him missing an eye, and turning him and his sister orphans. Now, it seems Fuchman has returned when a new series of murders starts to spread across a city, with an eager (and gay) priest John tasked to find Ahab and help him kill the monster. Further joining the duo is Twink, a gay street hustler who's father was one of the more recently murdered men by Fuchman and what started as a personal vendetta will soon escalates to supernatural proportions as the fate of the world will soon be on stake.

Sounds good, no? Now, Father's Day does live up to it's slasher-action exploits for the hour before it goes to pure Troma territory again. This first hour had it all: nasty murders and father rapes, some cheesy psuedo-grindhouse grit, and one unsettling killer, rolled into one strange but thrilling slasher-revenge hybrid in vein of Highway Men meets Drive Angry. It's was way above the usual over-the-top mindlessness that the company is known for, almost dead-on being a decent exploitation tribute. But after which, when we believed it was over as the killer gets murdered himself, a new twist takes place which puts everyone in hell. Literally.

It's not entirely bad, it's just the thing gets sillier and sillier by the minute and it quickly looses almost all of the charm it was building with that favors my taste for bad cheesy horror flicks. It can be a bit funny if it wants to, like that obvious Star Wars Java the Hutt-esque scenario where a captured character is taken prisoner by a completely obese monster, or the fact that they commit suicide ala Russian roulette to get to Hell (or Heaven) in the first place, but there is a thing as being too silly for its own good and Father's Day just dove too deep into cartoonishly overwhelming proportions that the climax literally gave me a headache and I needed a glass of water and a Tylenol just to ease up my brain after watching the damn thing.

It's a Troma fan's wet dream, I assure you that. If you're one, or at least seen two or three titles of their releasing to somewhat understand the tone of the movie, then you can expect the same thing from Father's Day, only more thought through and imaginative at some places. I enjoyed it in a silly manner for a few while, but as soon as the "hell-scapades" start, I can easily say to myself that I overstayed my welcome to this title and was more than willing to ditch the inexcusable collection of senseless taboo that no film would try to tackle, played out in the table like cards and rearranged to form a story and a jumbled mess meets clever ingenuity with a 50-50 chance of being hated and loved. I came to see it out of curiosity and it nearly gave me a tumor by the size of a bowling ball in my head at the near end, but I'll assure you, if yer up to it, it's purely watchable. So until then, I'm gonna rest my head for a while as, I swear to God and Buddy Jesus, that tumor's singing in my head again...