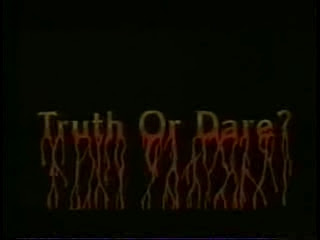 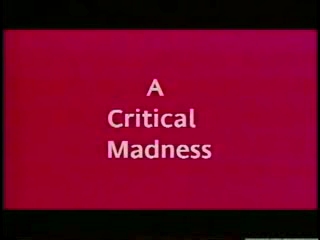 Shot on Video horror flicks normally have crap written all over them but a lucky few did brought up some creative twists on what they offer as entertainment such as the likes of Thankskilling, Murder loves killers too, and even Nail Gun Massacre so to speak. But had any gone to the same shock and gore value as Truth or Dare?

Mike Strauber came home from work one day only to find his wife in bed with his best friend. Shaken and distraught, Mike heads to the beach to clear his mind but a violent schizophrenia began to tear away his sanity, leading him to play truth or dare with imaginary characters that forces him to kill himself.

He nearly succeeded but was later found by some random by-passers who rushed him to a nearby hospital. There, he finally snaps (as you would (?)) and plots to take revenge on his cheating wife and his best friend. He managed to kill the former but his wife got lucky and cuts his gut with a knife, leaving him for dead but only to be saved by, once again, random by-passers. (I'm seeing a pattern here)

This time, however, Mike was institutionalized due to his homicidal behavior and over the time he stayed there, he played truth or dare with his imaginary victims until the day some orderlies made a dumb mistake of giving him a photo of his wife. This triggers his maniacal side once again and, after murdering same said orderly, made his escape to some poor schmuck's car. Now on the streets, Mike's out for blood, murdering all of those he came across his bloody journey to end his wife's life...

Critiques have every right to question this film as, frankly, everything from acting and plotting, to lighting and script, A Critical Madness fails dramatically like a guy with amnesia in a game-show; no cast here had the capability of making their performance believable, often sounding or acting like as if they're ad-libbing their scripts. There's also the fact that it's poorly edited, making the convenience that one maniac had a spiked flail, some nunchakus, MK47, a grenade, a chainsaw, a machete, some pistols materializing from nowhere odd enough to question the film's credibility as a serious horror. (Well, okay, it had potential of being a serious horror for the first 10 minutes or so, up until the part when weapons start materializing out of thin air, hallucinations of mutilated folks, and the terrible overacting.)

Of course, one can't blame a debut effort for trying its best and that's a feat for me; true, Truth or Dare? suffers the same fate as many other home-made slasher titles have but director Tim Ritter, 18 years old at the time, had visualized a shocking movie and he succeed at that. It's violent, bloody and gory to the standards that it challenges the public's limit for gore and violence, packing some of the most horrid acts of murder.

He also made one of the more memorable underground villains, as Mike's no fancy boogeyman who likes simple knife stabs or arrow shot to necks, but rather he's a splashy fellow whose murders include machine-gunning elderly folks and people on fire, running over babies and their mums, and (apparently a fan favorite) a drive-by chainsaw slashing of an innocent boy.

Truth or Dare? fails to be anything but scary, but it does work as being one sick mother. With blood, torture and ultra-violent deaths packed up, you won't even care if the rest of the film is laughable or beyond believable for that matter. It's not everyone's cup of tea but it is worth a look; who knows? Maybe you'll see too why it's so deserving of it's cult status as a successful SOV slasher flick.

bodycount:
1 male knifed offscreen
1 male dismembers himself with a knife
1 male stuffs a grenade into his mouth, head decimated
1 male gets a pencil to the eye
1 baby ran over by car
1 female ran over by reversing car
1 male and 2 female accidentally ran over by a car, immolated in explosion
1male set ablaze and repeatedly shot with automatic rifle
1 male seen dying from gunshot wound
1 male burned to death
1 boy sliced in half with chainsaw
2 elderly male and 1 elderly female machine gunned
1 elderly female had her neck bashed with spiked mace
1 female found dead
1 male shot on the head
total: 19
Posted by Kaijinu at 9:55 PM