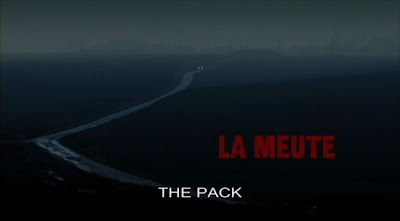 Seeing this being marketed as a zombie flick, I rented a copy for old time's sake and rekindle my love for zombie flicks. Upon finishing however, it came into view that it's more than a simple zombie flick, but a hodgepodge of genres rolled into one creepy Euro-horror flick that caught me in the arse!

In the middle of a snowy no man's land, Charlotte is in a path to literally nowhere as she ventures on, stopping only whenever she have felt at home. Brushing against bikers at the least, she picks up Max, a hitchhiker who looked friendly despite being quiet and meek. They stop in a truck-stop restaurant for some breakfast, and after a small roughhouse with a trio of the same bikers from before, they managed to stay alive thanks to a shotgun totting bartender, La Spack.

After which, Max excuses himself to the bathroom, but when he failed to return, Charlotte starts looking for him in vain.

Returning that night, Charlotte finds a hidden door in the bathroom that leads to a secret room and soon got herself held captive by the bartender, who turns out to be Max's mother. She, along with a few others they've kidnapped, are kept for a ghouslish reason; as days stroll by, she watches La Spack and Max kill and drain their victims of their blood, but what appears to be a psychotic family is a far smaller threat compared to what's lurking in the night.

One part zombie flick, one part creature feature, one whole rural horror, The Pack spends a lot of its time building the mood and tension of its vague, near-Hitchcockian scenario where anything could had happened; the first half is your typical "women in peril" plot (and a few Redneck horror attributes thrown in), with given emphasis on her escape and her captors murdering people in front of her in typical slasher-thriller film fashion.

And then, slowly, it shifts to a pure horror territory with the arrival of the monsters, with much eeriness in their nature and a malevolently ravenous appetite that matches the hunger of G. Romero's zombies (technically the ones in Day of The Dead (1985)). Coming as a cross between Tremor's Graboids, The Pale Man from Pan's Labyrinth and undead miners, there were actually no clues given to what or where the creatures came from; all that was given about them was that they're born of blood and they come to feed every time it is spilled in the ground. (That, and in the ending credits they were labeled as "Golems". Cool~)

Director Franck Richard plays a clever take on imaginative flairs instead of cashing in tons of visual flashiness, as the film focuses less on high flung action or grand set-pieces, and instead concentrates on mood and art direction towards the bleak and grim. This includes some gritty locations and some great outdoor scenes, a well tune score to go with the mood and some subtle gore that stays "clean" in the whole while.

It does had it's cliches concerning backwoods horror or the typical zombie film scenarios (why is it every time zombies come out, they will haul up in a cabin and always end up running out from it in the end?), but thanks to a broad set of characters (with Yolande Moreau, Émilie Dequenne and Benjamin Biolay playing the three lead characters with much creativeness and wit) and a carefully written script, The Pack stood one step ahead from mediocrity, into something slightly original and a worthwhile horror flick.

A wild card that caught me by surprise, France did it again with this fair and entertaining siege horror; a few better fixings and The Pack would have been one fine entry to hodgepodge horrors alike.

Bodycount:
1 male gets a nailed board to the head
1 male had an arm torn off, eaten alive
1 male hacked with pitchfork, decapitated
1 male had his heart torn off from his chest, eaten alive
1 female repeatedly shot, eaten
1 male clawed through his gut
1 male burned to death
1 female presumably killed
total: 8
Posted by Kaijinu at 7:23 PM