The Curious Case of The White Stocking Strangler: He Lives By Night (1982) 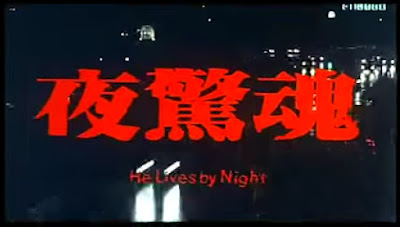 While most slasher fans of today may point out Dream Home as Hong Kong's foray into all things red and sticky, hardcore bodycount fanatics would know that our friends from the East have dabbled into this fair sub-genre since the 80s with titles like Corpse Mania (1982), Devil Returns (1982), Phantom Killer (1981) and this, a giallo-inspired horror comedy with a strange-o-meter tipping the scales.

We open the movie at some bar with a guy wearing what looks like Michael Jackson's red leather suit from the Thriller music video, doing the robot on a smoggy disco floor while pulling down the lever of a giant slot machine that dispenses a blonde that goes "oooh" in front of the camera. I have no idea what all of this is and I am afraid to find out. Let's just leave it at that.

Some time later, the blonde decided to go home alone but was intensely attacked by someone armed with a boxcutter who then proceeds to strangle her with her own stockings. All of this happened below the apartment of our lead, a tomboyish radio DJ named Sissy, who then tries to snoop around in hopes of getting a good story for her show. Arriving there to investigate is Dragon, an overweight police chief who is smitten with Sissy, and his cohort Wong, a young officer who happens to be friends with Sissy and is helping his boss get a date with her. While the trio engages in a weirdly comedic and romantic angle, the killer continues to slay women who all appears to be wearing white stockings.

While the horror scenes appear to be played straight, He Lives By Night is a movie that will either invite you to enjoy its true jokey nature and laugh at how absurd it is, or will leave you wondering what exactly is going on.

A good bulk of the film focuses more on Dragon and Sissy's hilarious adventures in dating, including the fat commissioner showing off how he can get away with almost anything illegal (such as drag racing and not paying a parking ticket), and that one scene where he puts on some make-up and dances for the lovely DJ. All of these scenes are played with an 80s charm from outrageous get-up, false scares, subtle yet silly situations, and a cheeky good vibe that almost seems out of place considering the film is supposed to be a murder mystery, which come to think of it, isn't really the movie's strong point seeing the killer is revealed very early into the film.

It turns out that the killer is a former husband who caught his wife in bed with another man. In a fit of rage, he murders both, the wife strangled with her own white stockings no less, and was placed in a mental hospital wherein he was treated until deemed sane enough to be released. Unfortunately for them, he is still unwell and the sight of white stockings pushes him to take on a female persona and kill whoever the clothing belongs to, resulting to a series of attacks that are surprisingly intense and have their moments of being frightening.

What's interesting about He Lives By Night is that it manages to put these two conflicting tones well together in the final product, as the romantic-comedy tends to dip into the mystery from time to time while the horror scenes also have their own share of funnies. One particular attack had the killer follow a pair of girlfriends back to their home where they proceed to prank one another; once the killer got in, one of the girls mistook him as her friend and proceeds to play with him until she recognizes the threat was real. It's a scene that shows how well the two conflicting traits are delivered as it is satirically funny seeing the killer being stalked by his victim, but it builds up to a vehement home invasion that is bound to satisfy horror fans.

It's not high on bodycount nor are the kills that bloody (save, again, the home invasion scene), but the hybrid atmosphere of He Lives By Night is what makes it a worthwhile addition to any 80s slasher collection. The last third is where the craziness of both genres are put to the max, with Sissy being trapped in a near-abandoned radio station while the killer terrorizes her with a boxcutter, a gun, and soda vending machine(!); the humor was intentional and have more hits than misses, and the actual chase scenes are some of the best I've seen since the Hallway Chase from Prom Night (1980).

While it may deter horror fans who wanted something more serious or straight-up out of their timewasters, this film is everything a slasher is with a witty and diverse twist. a modest entry and one that deserves a try, may you be a hardcore slasher fan or just a curious cat! So see it if you have the chance and I assure that you the strangeness will have its way with you!