1.a brief treatment or account of a subject, especially anextensive subject; concise treatise: a compendium of medicine.
2.a summary, epitome, or abridgment
3. a full list or inventory: a compendium of bodycounts.


It's always a dream of mine to follow the footsteps of certain bloggers out there who are making a name with their sites. (and one of them published a book!). Though I'm sure this site's not getting a print job (for now), I do love what I do here and it's a nice way to fill in my spare hours.

Sticky Red tackles slasher films as well as title that influenced the genre, influenced by the genre and includes a decent (and slasher-like) bodycount. I'm not planning to review 'every" slasher made (I don't think my brain could handle that), just those that I'm lucky to get my hands on (and considering where I live, I'll need every luck I could get).

What to expect to be reviewed here in Stickyred:

Slashers: The main sub-genre that inspired me to blog. From masked undeads to burnt-up child molesters; from silent figures with knives to cross-dressing psychos. If it stalks, kills, routined, cliched and bodycounts, it'll be here.

Giallo/gialli: The Italian crime dramas that mixes horror, narrative and good old-fashioned amateur police snooping to reveal a culprit within a sea of red herrings. You could call it that, but simplier definition could call them Italian slashers. (Though, I wouldn't call them that...)

Thrillers: now, depending on what kind, StickyRed will focus on thrillers that has the slasher influence in them, such as Dressed to Kill, Silence of the Lambs, American Psycho, Etc.

Thrillers such as Outbreak or Catfish will not be reviewed here...even if they're really awesome.

Hybrids: A slasher film in space? A slasher film siding with cops and robbers? Werewolf slashers? If it has the build-up of a slasher flick, mixed with another genre, then you'll have yourself a Hybrid and a review for flicks like Maniac Cop, The Terminator, Wolfen and even Stephen King's Maximum Overdrive.

Aftershocks: Now and then, I'll be including a bit of surprises of a review of films that doesn't resemble slashers, but may might as well be enjoyed by an avid fan. Flicks such as the rarely heard Mother's Boys, Dead Calm or even Dirty Harry may not feel like real slashers, but if you're a fan of a genre that involves faceless figures killing and stalking, you can notice a few of them seeping in to such films. Here's in StickyRed, we honor these films, for bringing the game to a whole new level: Mainstream! (You know what I mean...)

Others: It's a surprise~ 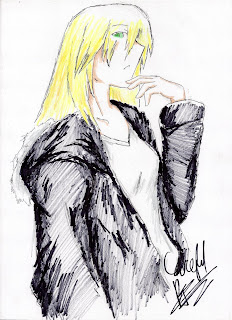 Felicia Goldstein is my attempt to create an original character, mixing the stature of Esther from Orphan, the kill-creativity of Angela Baker from the Sleepaway Camp movies and the personality and calmness of Mrs. Voorhees of the first Friday the 13th. She used to be in a series of "ideas" for a slasher manga (Japanese comics) where Felicia and her family of psychos goes around America, killing random people while fighting off other slashers to lower the competition. Sadly, due to my hectic schedules for college crap (and most recently, my work), I only had time to doodle drawings of her and her family.

Now, Felicia is a stand-alone mascot for the Sticky Red blog, showing you that you don't need to be large, tall, and manly to be a great slasher.