Psycho of the Month: Candyman 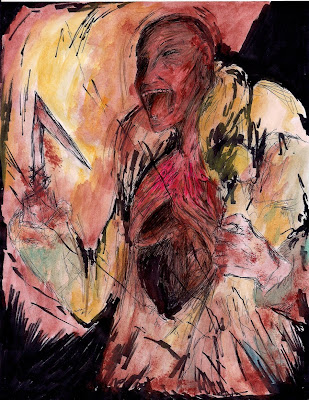 For this Valentine month, I'll go with the most romantic monster in slasher history: Candyman. Let's face the facts here; his mortal death was around love and even in his immortal life as a story-powered boogeyman, he wouldn't hesitate to find a woman to love and "to die" for him, seeing it as his own way of being together as one "supernatural kind". He's even going as far as killing off anybody who seems to be getting in his way or would had tried to harm his love.

It's kinda tragic in a way, but I could be just saying this cuz of my initial reaction to the season finale of a certain fave cartoon. But it could be just me, being lovesick and sees Candyman as the same. Whatever the reasons are, Candyman had the Valentine spirit going, as a tragic monster in vein of acceptance and warmth in  shed blood.
Posted by Kaijinu at 10:54 AM

Email ThisBlogThis!Share to TwitterShare to FacebookShare to Pinterest
Labels: Badly Drawn masterpieces of mine, Psycho of the month, supernatural