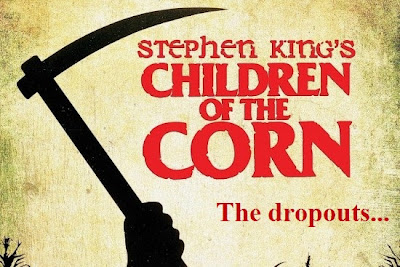 Children of the Corn never needed a franchise. In fact, being adapted into a 1984 movie was all the franchising the short story needed! But some unseen force (He Who Walks Behind the Rows, perhaps?) was probably at work when they thought it'll be a great idea to follow-up the 80s cult classic a decade later.

To be fair, the first three sequels have their varying lengths of entertaining grue and silliness, from urbanizing the corn cult to just cutting off ties from the whole cult itself and be a humble slasher movie.

And then comes the dreaded downhill.

I don't know if Dimensions is to blame for trying to make a living out of a dead horse franchise like this but here are the last four Children of the Corn movies the studio cooked up (so far), with ranging wasted worth of film and talent, hardly any redeeming factors whatsoever. I would probably go through each of these titles as quickly as possible since they're not even worth two long sentences for a review. That, or I'm just feeling lazy going through each of these movies. 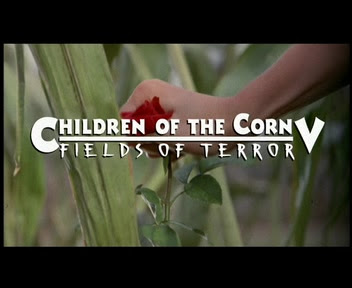 A group of road trippin' teens gets lost and arrives in Divinity Falls, home of a child cult serving "He Who Walks Behind the Rows", who they believe resides with them in his earthly form as an old coot. Technically, the teens could just leave right away (in fact them crazy kids are insisting upon it!), but when one of the them finds out her brother's a member of said cult, our group decided to stay and snoop around. Call local authorities. Be heroes.

Of course, we all know how fucked those plans will be.

Now, here be the goods: cinematography is lush, there's a Kane Hodder cameo, Eva Mendes in her early roles, some good kills here and there (and a hefty number, too!), steady paced, and some nice ideas thrown into the plot.

But, as much as the plot has its creative juices going, it still ain't enough. It's still a stale run through the basic slasher film tropes, with annoying looking corn cult members who are more teens than munchkins, lack of scares, devoid of suspense, and very thin and predictable plotting. What's worse? That dumb ending that left its doors open for a sequel that's unsurprisingly never followed-up.

Bodycount:
1 male electrocuted by lightning
1 female slaughtered offscreen
1 female slashed to death with a sickle
1 male gets a scythe through the chest, decapitated with an axe
1 female jumps into a flaming silo
1 male set ablaze and falls to his death
2 males set ablaze
1 male had his head splits open
1 male gets a hole burned through his head
1 male sickled on the neck and groin
1 male shot with a shotgun
1 female brained with a baseball bat
1 male bled to death from stab wounds
1 male had his neck slashed with a kukri
1 male lands and impaled on tractor harrows
2 males and 1 female immolated in explosion
1 boy thrown into a flaming silo
Total: 20 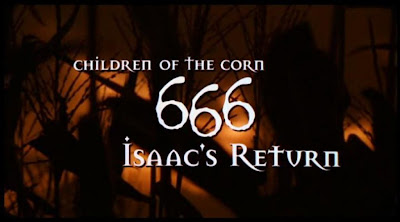 He-yo, lookie that! That midget child preacher from the original 1984 movie lived! Who would had thought that will save the franchise!

Isaac's Return has the original Children of the Corn's child preacher return from the grave (or his coma, apparently) to resume his reign as the leader of the killer kid cult, which is strangely, again, populated by teenagers. He also has to fulfill a prophecy that the first child from the original corn cult will be He Who walks Behind The Rows, thus leading a new group. Drafted into this is a lead heroine who may or may not be a part of said prophecy.

Would have been a nifty plot, but with a tedious pacing, lack of any creative kills or any workable substance whatsoever, Isaac's Return was a wasted effort that delivers so little promises and so many unnecessary addition to the franchises' mythology. Like how the heck did Isaac survive being blown apart by his own god? HOW?!

Bodycount:
1 victim seen hacked with sickle
1 male electrocuted with live wire on a wet floor
1 male slashed in half with a cleaver
1 male dropped himself on a scythe, impaled
1 male had his eyes supernaturally crushed
1 female forced to shoot herself on the neck
1 male impaled on a broken pipe
Total: 7 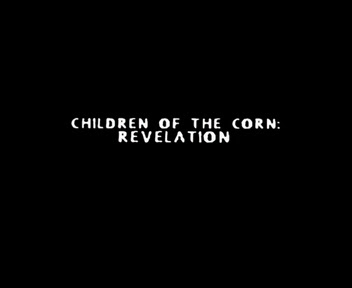 This one's a little better, but still far from anything impressive.

After numerous phone calls to her grandmother remain unanswered, a woman comes to her granny's apartment in Omaha, Nebraska only to find it empty.

Investigate here, investigate there, and viola! She finds out the apartments were built over the remains of another corn cult, who burned themselves after failing to kill the adults. Of course, now that she's there, a dark force returns to make sure her fate of being dead is sealed.

I have to admit, this one's a little slow but it has an interesting story; I like the idea that the corn cult was expanding and that each has their own take on their religion. With the lame take on Fields of Terror and the confusing derivative of Isaac's Return, it's nice to see a simpler take on the cult with a small dash of mean spirit as it involves children burning themselves for a pagan religion.

Still, with little interesting kills and near-tiresome pacing, as well as a mediocre script, Revelation became more of a job to sit through and may leave some expectations unfulfilled. Which is sad. Real sad.

Bodycount:
1 male thrown off a bulding
1 elderly female ran over by a train
1 female tangled by corn husks inside her bath tub, drowned
1 wheelchair bound male pushed off a floor and falls to his death
1 male head found
1 male suffers a heart attack
Total: 6 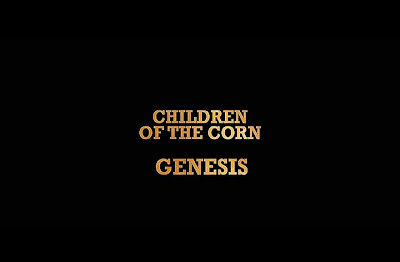 Wow, a zero rated flick. What could possibly go right?

Still trying to cash-in on a nearly lifeless franchise, Dimensions released this uber-cheap, low low-budget entry to the series which depicts a couple seeking shelter in a remote desert compound after becoming lost and stranded. The compound is owned by a weird preacher who demands that they leave by morning and not go Scooby-Doo in his house.

And guess what? They did go Scooby-Doo in his house. 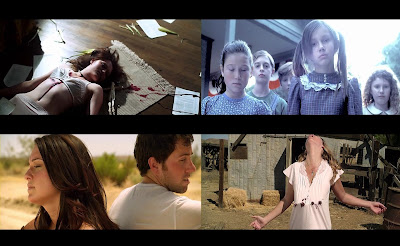 So now they're held captive and something weird, trippy, and most importantly, boring, this way comes.

I'll be honest here, this makes some of my most despised slasher titles looks like Psycho in comparison. Why call it Children of the Corn if you're just gonna focus on one brat who may or may not be a part of the corn cult? Sure the kid has psychic powers, and may as well be He Who Walks Behind the Rows incarnate, but why just let him stay inside the fucking shed if you could just unleash him and create unspeakable havoc while gathering minions of his own? 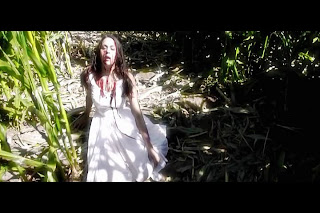 It tries to be an origin tale of sorts, with the preacher explaining the nature of He Who Walks Behind The Rows, which he did for the majority of the film. Just sit and talk. What's the point of making this an origin story if there's hardly any action going for it? If I wanted an origin explained to me, I would rather read a comic book, or a text book even! Anything but THIS!

Least the ending scene was kinda funny. That's the only good part about this shit-fest.