Preying For A Good Home Invasion: The Strangers: Prey At Night Trailer Thoughts


So, it took ten years for The Strangers to come up and finish a sequel. Well, basing my experience with other sequels and meta-sequels that took their sweet time following up a movie (Psycho II, The Town That Dreaded Sundown (2014), Phantasm V: Oblivion and Jeepers Creepers 3) I'm both excited and rightfully nervous, if not terrified of the notion of it flopping. (The latter thanks to the latter two movies mentioned. Worst. Sequels. Ever.)

So far, I can tell that The Strangers: Prey At Night may do more slasher-lite stalking and killing. I could be wrong, of course, since the trailer for the first The Strangers (2008) did made itself look like one, but unlike that film, this entry seems to have more characters in play so here's hoping to a considerable bodycount and more hack'n slashing action.
Posted by Kaijinu at 5:52 PM 2 comments: 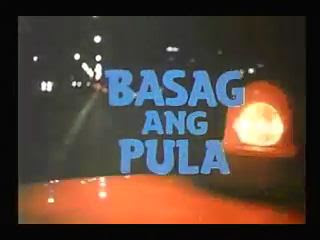 (Before I start, I would like to give a big shout out to Jenny Lo for helping me finally see a copy of this surprisingly hard-to-find film! It's people like her why I'm proud to be one with the horror community!) 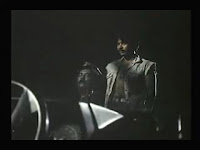 It's quite a shame my home country, the Philippines, never have that much of a demand for gory slasher flicks because rare cheesy gems like Basag Ang Pula shows that, if we really put a lot of effort to it, we could do a fun and messy bodycounter.

Basag starts with a treat by taking a varying stab on a well-known Filipino urban legend; a father drives to a party to pick up his teenage daughter only for their car to run out of gas while en route back home. The father gets out to find fuel, leaving his daughter inside the car to have someone guard it. This eventually proves to be a terrible idea when a crazed man suddenly attacks the car, frightening the girl into hysterics. The cherry on top? The man slowly reveals that he just freshly decapitated her father and he has the keys... 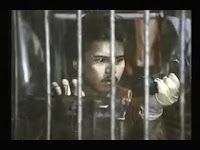 Another offscreen death and an opening credit later, the crime scene is now swarmed by cops, reporters and curious cats alike, and though they are baffled by the lack of motive for the killings, they are certain this is the work of the same maniac who apparently have been murdering folks around the city recently. 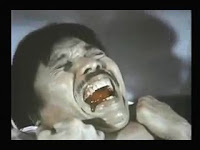 In a stroke of luck, the bus turns out to be a hired transport for a large group of high school girls attending a retreat and Fernando seizes the opportunity to pretend as the murdered driver's nephew to drive all the way to another city, escaping possible capture. Of course, it wasn't long before he can't hold back his murderous impulses once he and the class reach the retreat and the need to start another killing spree catches up to him soon.

While not necessarily a great movie per se, Basag ang Pula does work as a cheesy exploitation flick, somewhat bringing an amount of grit and teeth to an otherwise cheddar-tainted story of an opportunistic murderer slaying his way through a class full of party and/or sex-hungry teenagers. (And teachers) It could have been nothing but hokey hamminess comparable to some late 80s American school girl-in-peril slashers such as School Girl Screamers (1986), Blood Sisters (1987) and The Last Slumber Party (1988), with some scenes actually looking like it was going for that kind of mess (An Ouija board scene between the girls and their recently murdered classmate, anyone? How about a bonfire dance-off between the class goof and the local simpleton?), but Basag found a way to present itself as this dirty and grim-looking creature for over most of the movie's entire run, mainly thanks to our villain's unsettling character and the sheer relentlessness of his attacks, elements played the straightest and grounded Basag a place as a genuine horror movie. 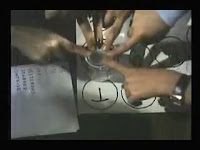 Though our villain is nothing anywhere as remarkable and noteworthy as many masked slashers reigning the box office of their time, his seemingly unprovoked killing streak and often robotic personality (courtesy of actor Ace Vergel) gave him an unpredictable edge, resulting to a rather sizable killcount consisting of often brutal dispatches without being that gory or inventive. (our killer only wielded two murder weapons: a hunting knife and, later, an automatic rifle) Two notable occasions Basag showed some worth for shock value were the beheading reveal at its opening scene and one part in the middle of the movie where a mentally handicapped man found himself at the wrong place, in the wrong time and through the bad end of a blade.

If there's anything that doesn't really help our antagonist stand above other slashers villains, it would be the climactic reveal of how exactly Fernando became this unhinged wherein his reasons and accompanying flashbacks reveal a tragic romance gone fatal, a cliche nearly as overused as the abusive parental figure when it comes to past traumas. This did lead to a minor mystery whether one girl in the retreat may or may not be Fernando's tragic lover who mysteriously disappeared from his life, but the lack of focus on this supposed sub-plot made it pretty weak and corny, succeeding only to give our killer a reason to hold back on committing a complete stab-a-thon. 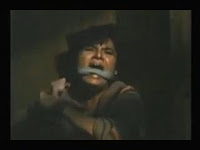 Oddly, too, is that Basag's also one of the few slasher titles that spent a good amount on writing and building up a possible final girl among its characters, only for her to be tossed aside in the last act and have the movie stretch 20 minutes more to switch itself from "horror" to "action thriller", with Fernando arming himself with a semi-automatic and shooting down armed cops on pursuit. It's certainly a curve-ball I never saw coming from this film (though it is nothing really new for me. Gotta blame Severance (2003) and The Majorettes (1987) for that one), but I overly enjoy its sheer silliness and macho-inducing reek, a kind of nostalgic grandeur of over-the-top entertainment that only vintage Filipino exploitation flicks can induce.

A rough little gem of a rare slasher, Basag Ang Pula was a challenge to find but I can honestly say that the hunt was well worth it. Cheesy and grim balanced right, this is one foreign entry that deserves a quick look for all slasher completists and horror purists.

Eight and a half minutes long. Produced by Eli Roth of the Hostel franchise. Yep. This is gonna be a fun one.

At a seaside funfair, a man with a chainsaw nonchalantly walks to the backroom of a haunted house attraction, apparently to work as a hired spook. Of course, with the man's quite demeanor (and this being a short horror flick), we all can tell something's not right and dismemberment soon happens left and right.

Originally made as a sort of sneak peek for a possible feature film, Chainsaw has quite a simple premise that harks back to classic horror stories of dark rides with deadly little secrets. It's pretty straightforward to what it wanted to do and we can easily tell this with the killer's quick succession of murdering five victims in such a short running time. Some may find this predictable and I will not argue with that fact, but this little devil packed enough blood and guts to satisfy bloodthirsty gorehounds and I like the fact that they went on with it in gruesome flair and a bit of dark humor.

It's a quick slice of gory horror pie so there's also very little to argue about in terms of writing and characterization. The victims are victims, the unknowing bystanders are just unknowing bystanders, and our nameless killer is just a nameless killer, though we are shown that he likes to eat raw meat from his victims and that this little thrill kill might not be his last. Special effects are undoubtedly the short's key player as juicy red corn syrup and chunky latex parts are everywhere once the climactic slaughtering begins and even when it ends, having an artsy touch to them with nasty slow-mo close-ups that kinda reminds me of a dismemberment scene from the cheesy cult classic slasher Pieces (1982).

As of writing this, it's been two years since Chainsaw was posted at Crypt TV, a website Eli Roth co-founded. Whether the attempt to make something out of this short failed or it's taking its sweet sweet time fermenting into a genuine feature flick, I will say that this tiny terror ticked every box in making a good fun slasher. If you need quick fix of blood and body parts, then try giving this Chainsaw a gander and see the small buzz it made for itself.