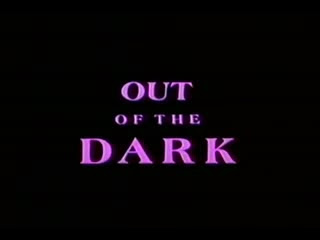 Out of The Dark (1989)
rating:***
starring:  Cameron Dye, Lynn Danielson-Rosenthal and Karen Black 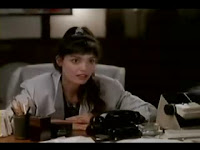 Suite Nothings is a sleazy L.A.-based "fantasy" hot-line that provides phone-sex services 24/7, voiced by failed models who treat their callers with whatever fantasy they are into. Among their regular callers is "Bobo", an individual whose twisted sense of humor is matched by his warped mental state. He frequents the line and, apparently, is also the one responsible for the string of murders wherein all the victims are girls working in Suite Nothings. Dressed in black and obscured with a clown mask, "Bobo" is now in pursuit of a newcomer who decided she's better off figuring out who is underneath the mask and stop him once and for all. 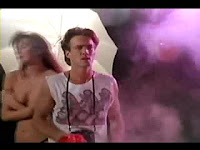 Out of The Dark is B-movie material from its cast of lesser names including a post-Pieces Karen Black , to cheap plotting with some cheddar-grade sleaze, which isn't entirely new to the genre as De Palma's Dressed To Kill had already set that notoriety to an ante and was soon followed by other similar titles such as Cruising (1980), Fatal Attraction (1987) and even the obscure Crimes of Passion (1984). However, compared to these titles, Out of The Dark is closer to a routine slasher with girls being stalked by a loonie in a mask and some murder-mystery angle that had enough thrills to keep a fan satisfied. 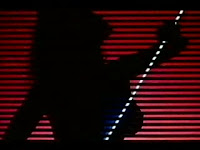 While relatively bloodless, the attacks themselves are interesting to sit through as they are silly to look at, hailing enough late 80s slasher taste including the killer's groggy voiced wisecracksand some outrageous set-pieces like a particular "ball park" scene that had a co-worker play "mime baseball' with the Bobo the clown, unknown of his murderous intent, only to had her skull beaten open in the end. Some of the film's stronger moments did brought out some good dreading and well-thought creativity to the screen however, like one clever build-up where another co-worker was set-up by the police as live bait, prompting the clown to phone her from a hidden location as they try to bug the caller, only for us to find out the call was a pre-recorded and the killer's hiding behind her all along. 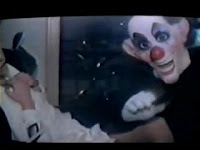 Out of the Dark kept up with this routine until the hour mark comes and it shifts its tone to thriller territory on full force; police procedural replaced stalkings and red-herrings began to fill the screen as the mystery behind the killer's identity tackles one twist to the next until the fairly weak albeit acceptable finale.