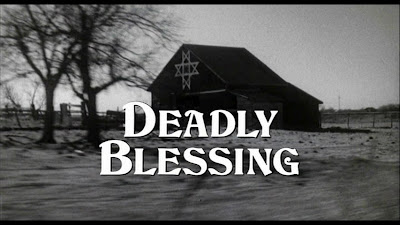 My view on Wes Craven's films were always a positive one save the time he spewed that bore My Soul to Take. Luckily, he fixed right it with a sturdy entry to his Scream Franchise last 2010, a movie that is completely unnecessary yet fun to watch. But there were times when my faith to the good man's works tend to falter a bit; his Last House on the Left (1973) didn't live up to my expectation as a gruesome and sadistic "rape and revenge" flick despite being watchable, and now this, perhaps the one and only Amish slasher.

To be fair, Craven only directed this and frankly, I know very little of the Amish community other than the fact that they all dress alike, sports groovy side-burns, and for some reason hates anything with cogs, clockwork and runs on electricity. And I just thought this sub-genre couldn't get any weirder, the slasherdom decided to tackle all this. 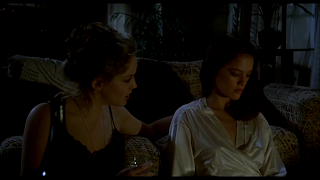 Jim, a former Hittite, and his big city wife, Martha, lives a peaceful farming life among a strictly Amish community who rejects them for both bringing technology unto their land and for being neighbors to an estranged mother and her daughter, who they believe is an incubus. Martha and Jim put down the latter as plain superstition but one night, ole Jim was seemingly crushed to death by his own tractor. His death was ruled out as an accident the next day and to make it worse, the Hittites wanted to purchase the land from Martha seeing that its true owner is gone. Suspicious? Definitely.

Thankfully, coming to visit and to keep Martha's spirit alive are her friends from LA (one being, GASP! Sharon Stone?!), but it seems that someone- or something- wasn't finished with their work yet. Something that might be responsible for Jim's apparent accident and is continuing to knife away anyone that gets in the way.


Deadly Blessing is a structured slasher film to the bone with an added touch of the supernatural and social commentary. The Amish here are placed in a position of either friends or foe to the main casts, and the movie's examination to the community's lifestyle and beliefs brings as much consideration to think whether who's right or wrong. Martha, skeptical of the Amish's supernatural ramblings and strict rules, tries to bring rationality and openness to the town, while on the other hand the Amish tries their best to preserve their way of life, shutting themselves from any possible source of their evil. Craven seems to be practicing the same thematic tone of diversity as of his The Last House in the Left and The Hills Have Eyes, though clever enough, there were moments in the film that it became ambiguous to whether the supernatural is at hand or that a loonie is out there clenching a knife and is responsible for the attacks. As the story progresses, we can later tell that one side of the coin was no more than a big red herring from the beginning.

Outside the theme, Deadly Blessing plays a straight face for most of the time; despite the supernatural angles, it still practiced some of the usual tropes such as killer's POV shots, giallo-esque black gloves, and yes, practical murders done away with a simple kitchen knife. It even done away not one, but two shock sensationalist reveals, each made to fit a specific taste for a win-win situation for fans alike. But if it's going to be any hint, I would at least reveal that the killer's pretty much tangible. 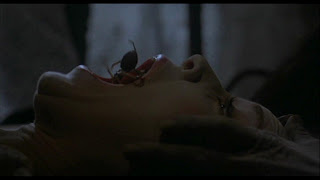 Some nifty suspense scenes also gave this film a good viewing, which oddly includes Sharon Stone in most of them, such as a scene where she's trapped in the barn with all the windows are being systematically shut from outside by someone, as well as the now infamous spider scene, where a live (and de-fanged) spider was plopped down in Stone's gaping mouth. It's a sweet practice on nightmarish imagery, Craven himself even recycled a scene where Martha was attacked by a live snake, all shot via camera between her legs, to his magnus opus, A Nightmare on Elm Street, in the same manner as Nancy was menaced by Krueger during the now famous bath tub scene.

With scenes like this, Deadly Blessing somehow made the country side, despite beautiful, look eerie and mysterious. A solid shocker, with a partially convulsed story and a ridiculous finale, but Craven showed that he got the skills to at least make a silly plot worthwhile. Even if the ending's totally off the wall.