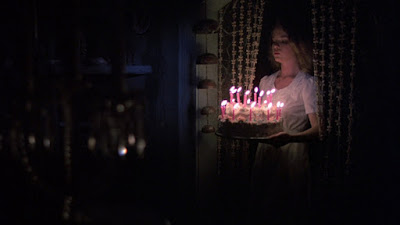 Which one am I more likely to survive from? A murder mystery involving a wigged-out girl suffering from blackouts, death by kish-kabob and Scooby-Doo inspired plot twist? 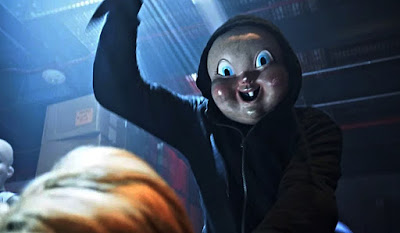 Or a murder mystery involving a baby-faced killer, time loop and endless possibilities of dying over and over again? 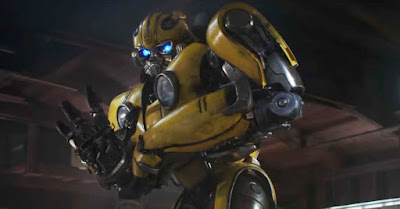 ...IT TOOK THEM 12 YEARS TO MAKE ANOTHER ONE THAT WORKS?! 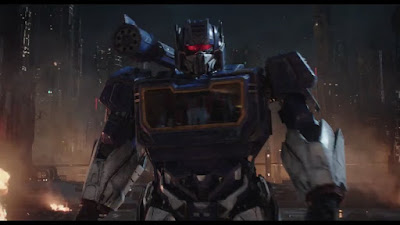 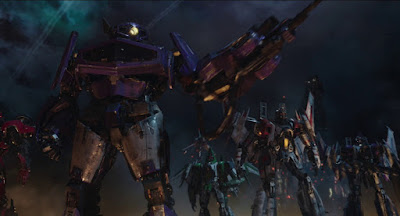 THEY EVEN GOT MY BOYS SOUNDWAVE AND SHOCKWAVE LOOK RIGHT! WH-WH-WHAT?!

IF YOU'RE YET TO SEE IT, YER MISSING OUT! IT'S PROBABLY THE TRANSFORMERS MOVIE YOU'RE WAITING FOR, OR YOU BIG-HEARTEDLY DESERVE!

ALL CAPS!
Posted by Kaijinu at 8:23 AM No comments: 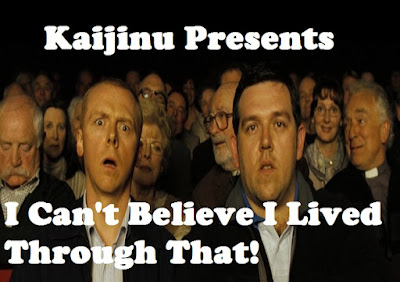 In today's episode, we have cleavage, skimpy night gowns and badly scratched photo quality packed in 69 minutes of eternity. I present to you... 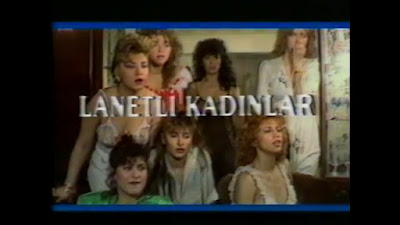 Oh hey, a Turkish take on Agatha Christie's And Then There Were None! Only with badly acted women, very obvious budget restraints and cheese! Lots and lots of cheese! What could possibly go wrong? *insert internal screaming here*

A shot-on-video production of the lowest kind, Lanetli Kadinlar starts with six women getting a message one by one, inviting them to a remote island. Each of the gals have their own thing going before getting the invite; some were dancing, some were having a private lingerie photo session, but one of them appears to be having a bitter day as she looks at the camera with murder in her eyes while clenching a knife.

It isn't long before the girls make it to the island, with a grand mansion and a seventh lady expecting their arrival. Next thing we know we have fur coats being taken off, stringy and lacy undergarments are put on, and cat fights this way come as the girls come at each other after throwing a couple of insults. Things turn for the worse when the man who apparently invited them turns out dead at a park back at the city, a news that puts everybody on edge and growing a tad suspicious with one another.

Come the following morning (and a lesbian shower scene later), one of them is found stabbed in the back with a knife, indicating that a prowler (or, considering what plotting this movie is based on, one of girls) is out for blood. With no way out of the island, the remaining gals (still mostly wearing nothing else but skimpy baby dolls, mind you) must find a way to fend themselves against their killer who's finding no trouble snuffing them out via strangulation and poison.

To be frank, I never expected much from this film seeing this is made in Turkey around the early 90s. Turkish exploitation movies usually have that off-the-wall execution that's tries to look ambitious but ends up looking just insane, more often in the pretense that they're trying to better or at least equal popular mainstream movies. Kadinlar tries to be an exploitative murder mystery inspired by 70s Italian giallo, which honestly should work as the movie at least shows the basic structure of a mystery thriller, but the shoestring budget gravely affected everything this movie has to offer, may it be editing, acting, sound, picture quality, cinematography or, worst of all, direction.

The only thing I will remember Lenetli Kandilar for is the very fact that this is my first Turkish movie reviewed in this site. (at least, around the time this is written) Aside from that, this is nothing but pure garbage fire to keep the legions of hobos around my neighborhood warm for the night. 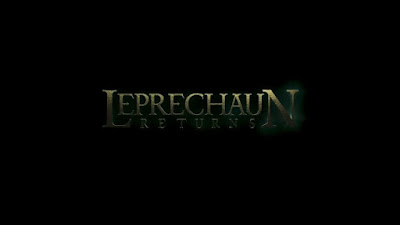 Previously on a Leprechaun review: Rage! Despair! Confusion! As after somewhat enjoying two Hood Leprechaun movies (more of the second than the first), the admin channels his inner 1860s newspaper critic Jebediah Atkinson (Saturday Night Live version) to unleash a plethora of rants upon Lionsgate's 2014 disaster of a movie Leprechaun Origins, a film that tries to be a serious and gritty reboot of the entire Leprechaun horror movie franchise that sucked ass for completely missing the point of the entire damn franchise, as well as being a boring overly cliched piece-of-shit.
Three years passed and now a new Leprechaun movie surfaced, promising the return of the evil Irish dwarf  that we all know and love rather than the dog-faced naked man-monkey Origins tried to pass on as a leprechaun. Will this be the return every horror fan is waiting for? Or at least the fans of the franchise?

Ignoring the sequels that came before and acting as a direct continuation of the original 1993 Leprechaun, (Halloween (2018) influence?) Returns starts by reminding us how the Leprechaun was defeated with a slow-mo shot of a four-leafed clover being swallowed by the rhyming dwarf before melting and falling to his doom down a well. Cut forward to the present and we follow Lila, the teen daughter of  Jennifer Aniston's final girl character Tory from the first film, moving into an eco-friendly sorority house which just so happens to be the same house a certain Irish shoe-shiner attacked twenty five years ago.

Escorting Lila to the house is the now adult Ozzie, fellow 93' Leprechaun attack survivor and a dear friend of her mum, who eerily warns her not to go to the nearby well knowing what lies inside and fearing its return. By the luck of the evil Irish, however, Ozzie ironically bites it first after checking up on the well as the Leprechaun breaks out from him with the help of some evil juju. (Which involves a gold coin inside Ozzie's gullet, a little continuity we Leprechaun fans would know about. And ponder over. Seriously, twenty five years and that thing is still inside him? You hadn't been eating yer fiber, had ya, Ozzie?)

One exposition between an expiring victim and a tiny terror later, the Leprechaun, back in the flesh, wastes no time snuffing out folks left and right whilst searching for his gold, eventually crossing paths with our sorority gals who now must find a way to stop him from dismembering them one at a time. Luckily for them, they got Lila (And the ghost of Ozzie. Just roll with it.) on their side and with her slight knowledge of what makes the Leprechaun tick thanks to dear old mum, she got a trick or two on beating the killer dwarf. Hopefully.

Wholesomely welcoming the silliness of its premise of teenagers being hunted down by a creature twice smaller than their size blessed with magic murder powers, Leprechaun Returns not only fits nicely within the franchise's tone and giving it an actual continuity, but its also a very competent slasher comedy on its own to enjoy. It's not perfect as there are some scenes that felt too obscure unless you've seen the original (a few reasons why I enjoy the kind of franchising Leprechaun went for prior, with each film being its own standalone story) and some of the girls aren't that interesting, but the movie does have more hits than misses as an entry in the franchise, embracing the fun one can get from the simplistic yet insane situation and scoring well on gore and funnies with our lil' demon being the main source of both (playfully casted by Linden Porco, taking on the mantle from Warwick Davis who played the creature for six movies), all the while our human casts shares their own take on comedic dialogue and cheesy shenanigans that borderlines the meta satire of Wes Craven's Scream. (Or the Ash VS The Evil Dead series as that show's writer Suzanne Keilly also penned this movie)

Director Steven Kostanski brought upon this Leprechaun movie all the chunky gore it needs to get that splatstick flavor going, which is a fun feat considering his outstanding creature and gore effects from the amazing Lovecraftian horror flick The Void (2016). Leprechaun Returns certainly felt as close to being a supernatural slasher as Leprechaun 3 (1995) did, delivering one bloody murder at a time and showcasing the Leprechaun's wide array of powers. (Turns out he can multiply now into bite-sized mini-mes, which also reminds of another Evil Dead-related moment...)

Kostanski may have lacked an insight or two on how to push the movie forward aside from gags where the Leprechaun uses and ponders over our new technology and fashion sense but, nevertheless, it's still a more delightful watch compared to Origins. It's a backwoods slasher comedy with a wee Celtic splatter on the side that's bound to delight the fans of the franchise and too the open gorehounds who can tolerate a round of feisty Goodah.

Bodycount:
1 male disemboweled
1 male had his head ran down and crushed with a van
1 male sliced in half with a dropped solar panel
1 female gets a projected sprinkler head to the mouth
1 male decapitated with a drone's propeller
1 female lands face first to a trophy
Total: 6
Posted by Kaijinu at 2:40 PM No comments: