Ask me a Question: Is Hellraiser a Slasher? 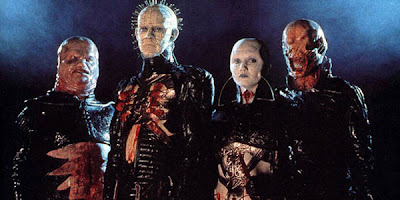 So last December as of writing this, I did a Hellraiser marathon with my DVDs, along with some buddies, and started listing the deaths (and the number of pizza we ordered); and I started to see...influences. So is it really a slasher film in disguise? Has my belief been shattered?

Not really, the whole franchise isn't as stalky and slashy as some people sees it. There's a few titles that have gone to this style but let me break it down to you all, film by film. (puts on smart glasses and pulls out a half-eaten apple)

The very first Hellraiser film is certainly a hybrid. The fact that Julia and Frank, with all their murderous intentions, are the main antagonists here, the cenobites were more like wild animals who were just summoned there because our lead "heroine" accidentally solves the box (out of curiosity) and bargained with them. The film's structure follows a certain pattern commonly found in slasher flicks: a past event haunts the present, a killer returns (in this case, Frank returns and created a killer out of Julia), and the sprees start. The second half is where the whole supernatural concept took over, nearly discarding the structure immediately to give way to a more "epic" surrounding, Hell itself and the dogmas that its creatures follow, which is that no one escapes Leviathan and anyone who did must be taken back. The final product is indeed a half and half work, one part supernatural splatter film, and one part slasher flick; so far the film has its ways on being a slasher, but the fan's focus on the cenobites is a little more influential than the producers expected.

The second film, Hellbound,  was more epic in nature; now the leads have entered hell and the mythology of the film focuses more on the cenobites, their God Leviathan and their domain. That being said, it makes way to another killer, Dr. Channard, who was suddenly granted hellish powers as a cenobite by Leviathan himself, overpowering the spiritually weakened cenobites from the first. He has the making of a slasher killer, with weapons-attached tentacles slicing victims in pure slasher-like glory, but some the film's main emphasis was more on Julia. Note that during the climax, out of the six possible evil beings to survive, only Julia was shown without fatalities. The four cenobites was murdered by their new recruit, who in turn was accidentally killed by Leviathan when he undergoes transfiguration; Clive Barker's main idea here was to shape Julia into one of the many female slasher killers, hence the cenobite's physical forms being killed off and Julia's still trapped in hell.

Unfortunately, Pinhead's popularity was more overwhelming than Julia's, thus leading to the second epic entry, Hell on Earth. Here, Pinhead becomes the main baddie and lost the belief of order since that part of his soul was taken away upon his physical death. The film took a more grand nature, dishing slasher film inspired killings and basically just placing them in a supernatural trapping. But the structure is completely gone. Pinhead's take on world domination was more of a super-villain thing and none of this is befits the slasher taste. It was in here that the series began to wander off to a more epic settings, taken to ridiculous heights in the next flick, Bloodline.

Bloodline has its moments of slasher tropes; the first generation flashback certainly proved this, but when it moved to the second generation flashback, the murders were few, only a couple to satisfy some urges from Pinhead's new pet, Chatterbeast, as the whole emphasis of it was more on Pinhead's attempt to bring Hell on Earth (again). The "present" story of the film, taking place in the future, had the slasher structure. Stalk and kill, one by one murders, committed by Pinhead's new cronies all before they were banished to Oblivion and what might have been the end of the whole franchise.

After this, the franchise goes low into video, featuring a wide variety of mythos and structures from pure slasher film to murder mystery.

Inferno was more of a psychological thriller, a neo-noir of sorts where a man tries to solve some unexplained murders committed by a figure called "The Engineer". The cenobites hardly appears here in this entry. In fact, starting from this movie, the cenobites weren't as big a focus as before and they nearly appear only in minutes just like the first film. The sixth entry, and by far one of my favorites, known as Hellseeker took a neo-giallo style of story telling, marks the return of Kirsty but really involves more of her husband coping from his wife's sudden disappearance and solving the mystery of what might had caused it. All the while, he suffers visions of monstrous nature and wakes up finding, one by one, his acquaintances being murdered. Personally, it's a decent entry and does the slasher friendly sub-genre with much thought and imagination, if it wasn't for the low-budget.
The next film, Deader, which is by far the second worse, took psychological to a more extreme measure, almost surreal. It's definitely noir, but the plot's too convulsed for enjoyment and in the end, the low-budget of the film shines all through out. This strikes of low-budgetary continues with it's laziest and by far the most mediocre entry, Hellworld, which is the first and the only film in the series to tackle the slasher structure by heart. While it still has the psychological nature, the cenobites no longer just stand behind and summon weapons to sic at their victims, but they instead work by hand and murders their targets with much savagery as any slasher would. Sadly, this also marks the franchise's deprivation of idea and the film literally just killed the series' credibility as resulting film is pretty basic and uninspired. Revelation marks the return of the series, but it hardly even matters. Doug Bradley's gone, the new guy's an amateur by comparison and the plot hardly even made a dent as it only redo what we already seen and know.
So what did I learn from all this? The franchise is obviously for a wide arrays of horror fans whether what genre they love the most, they can't go wrong with a Hellraiser movie or at least the first four. It certainly has it's stalk and slash moments, but judging from its nature, it's more of a supernatural splatter flick all in all. The first Hellraiser might as well be the only entry to tackle the genre and did it right, but as for the rest, it's something I would like to call slasher-friendly films, something messy and red, something any slasher fans would enjoy shamelessly outside their fave horror sub-genre.

So there you have it! Til' next time, mates, as I tackle more of horror cinema's hidden and long debated questions!
Posted by Kaijinu at 11:32 AM