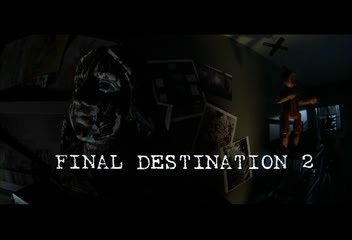 For a mini-classic, Final Destination has a lot going on for just one flick. Death hellbent on killing off those who are "lucky" enough to skip their due date is a film idea any horror lovers would like to see again and again, so Part 2 is inevitable to happen, rounding up a new set of teenage targets who may or may not be the lucky few who will get to their destination unscathed.

On route for a getaway at Daytona Beach, the teens come across a horrifying car-pile that causes the deaths of many but one. One who saw it all in an unexplained vision. Though failing to save her friends, Kimberly did manage to save seven others from their upcoming doom, pissing off Death once again as another series of bizarre accidents soon start picking survivors one by one to tie the loose ends. Their only hope lies on Clear Rivers, the last survivor from the 180 plane incident a year ago, who is willing to end the viscous cycle once and for all.

After the awesome and nicely orchestrated car crash, the film is quick to pick up the pace to deliver us more gruesome deaths with varying build and tools. The next deaths have us going from a small apartments to a dental check-up, with an escalating suspense as one situation leads for the worse and the kills come by unsuspectingly from everyday objects that you never would expect can kill anyone. (Or at least you suspected can. This is one of the many flick that proves how evil airbags are!) From then, it's one to two more deaths before the story decides to slow down for a breather to show us how all of this is connected from the first movie from Clear Rivers (who's bitter about the fact that her boyfriend, Alex Browning, is killed by a flying brick) and with another visit to local mortician Bludworth. (Still played by Tony Todd) I do find the connection to be a little concluding but, for the time being, it did make sense a bit even if the message is simple: Death is soon catching up and he's picking them off as quickly as possible.

You can pretty much tell this entry, while attempting to stay focused on the serious and grim tone of the first, has mellowed down a bit and added a few humor and camp for a more enjoyable popcorn muncher. Following the pattern of the first, it's still a howdunnit with Goldsberg-esque set-pieces playing as the murder weapons of the unfortunate survivors, with a promisingly higher death toll. The gore is immense with practical effects used more efficiently compared to CG and the kills have gone craftier. Pretty much, Final Destination 2 took the rule of the sequel and sacrificed some of its atmosphere for the blood which works, but it killed some of the scares and tone of the film in favor of more shocks and chuckles.

As a sequel, it's doesn't really live any higher. It's predictable in a sense of plot patterns and suffers a lot of cliches that markets this franchise, with only the orchestrated accidents and witty comebacks managing to save it. If it's any of a winning combination, FD2 has one leg on the grue and doom feeling of the first and one leg into the tirades of camp and torture that the next line of sequels would soon religiously follow with their own variations. It's nowhere a better entre' of its parent, Final Destination 2 still marked a thrilling gore ride that's just as entertaining as the first.

(Note: depending on taste, Kimberly and Thomas Burke is said to had died in a woodchipper accident in an alternate scene in Final Destination 3. Whether this is canonical or not is up to the viewer's personal taste)
Posted by Kaijinu at 8:08 PM