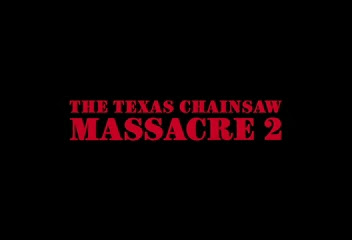 It's been a decade and a couple of years before we'd seen Leatherface and his cannibal clan. Now coming back in the 80s, the supreme reign of everything hacked and slashed, The buzz is back! And it was good.

Opening with a fine prize cut situation that shows how much the clan had improved over the years, two obnoxious teen boys, on their way to a party, giggles and pranks their way on the road, shooting signs and mailboxes with a gun, causing trouble on the locals and repeatedly larks a DJ hostess, Stretch. As night fall, the pranking continues, Stretch unwilling became a "witness" to a savage murder as the hoodlums re-encountered a truck they harassed, owned none other than the chainsaw-wielding, corpse-puppeting Leatherface (with double the gore! All Hail Tom Savini!) . The crime went recorded on their station, sound of gunshots and the roars of power-tools, but dismissed by the station as just a mean, and overly elaborate prank, until morning came.

Sheriff Lefty Enright, the uncle of the two unfortunate siblings from the original TCM, begins to obsess over the crimes. What the local authorities ensured was an "accident", Lefty knew otherwise and may have a clear idea who's behind it as he examines the saw marks on the two new victim's car. Stretch sees the news of the incident and reaches out for the good lieutenant's help.

Now set for avenging the hardships his loved ones went through, Lefty suggested to play the recorded attack on air to lure the clan out. Ensured he will be there on time to book 'em, Stretch agreed and later did so what she was told. Only, he wasn't there on time, Lefty was late, and now the goons are out to get her and is killing everyone to keep their slate unnoticed.

TCM2 is at the height of its time when it comes to ghoulish humor and gore; the latter years of the 80s weren't exactly slasher friendly, but TCM2 engineered a refreshing come back for our beloved cannibal family.

For a year where rock and roll is the rave, it's a trippy ride down to the bowels of hell as visuals and score brought up a nice, well-blended mix of surreal horror and campy, comic book terror. The characters themselves are notably insane or plain weird, a typical Hooper trait on his films. From the over-the-top Dennis Hooper's debut as a chainsaw-totting, Hand-of-God avenger to Bill Moseley's most iconic hippie-love, "Nam"-flashbacking Chop Top, it holds little on restraining the wild and untamed horror-comedy mixing on a twisted blend of a character movie. For once, we actually saw Leatherface react on his own, rather than being just another hulking killer, a subplot that involves the big guy falling for Stretch(!), as he innocently presses her chainsaw between her thighs, shares his "past time" slicing meat with her (while she's trying to have none of it) and even "romantically" dances with her (still, in her horror). Albeit a little side-tracking and a tad failure as a minimal element, I wouldn't blame everyone for trying. (at least it's funny...)

Adding to the family is Nubbins "The Hitchhiker" Sawyer's twin brother Chop Top, who remains a fan favorite and a cult recognized character that, while not having the same air of unsettling presence as his brother, provides enough grue and gags with his eccentric nature and laughable ramblings. Jim Siedow returns as The Cook, who now addressed to his full name, Drayton Sawyer, finally stepping down to his brother's level of insane theatrics of murder and mayhem, having much pride at his culinary skills while equally rambles about his family's unfit appreciation for his work.

It's quite noticeable how much TCM2 had changed from its predecessor. Either a good or a bad thing, the movie's lack of the very same atmosphere as of the first may be acquainted to it's lack of kills (despite the mountainous blood works) and it's big-budget look. The gritty feel of the first is gone, claustrophobic shots and crazy lighting, all that nightmarish feel turned cartoonish with elaborate set pieces and exaggerated characters, it surely would mean different for some of the fans, but it's far from bad. As in the bad kind of "bad". At least it's better compared to what the next follow-ups. (TCM The Next Generation, anyone?)

As the money burns on Hooper's late 80s entry, we all should be thankful we got to see Leatherface again! Far from the perfect way to do a comeback, Texas Chainsaw Massacre 2 was and still is a worthwhile inclusion to the series, and by far a strong one! What's my strongest entry, you ask? I could tell you, but it's a little controversial...