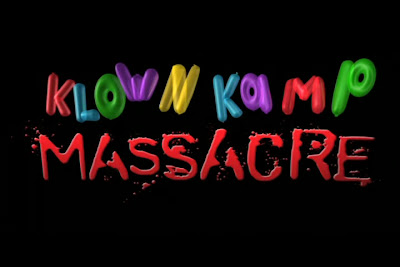 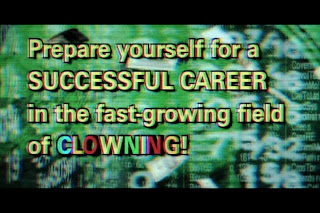 Taking place in a world where clowning is more of a respected profession than a part time job, a group of young clowns signs up for clown camp to hone their skills of bringing joy and laughter to people everywhere. With military-esque training made to teach these young fools how to be, well, fools under the watchful eye of Sgt. Funnybones and his monkey cohort, things were going rather smoothly; jesters bonded, jokes were thrown, and a camp fire tale was told about a certain young clown and insecure clown named Edwin who, after a trick gone wasted, went berserk and killed off the staff and students of a clown school. He was never caught, but some says he pays Clown Ranches a visit, with a murderous psyche and bad jokes to spare for himself to laugh on.

What comes next is your beloved slasher trappings done funny as Edwin turns out to be more than a legend...

Klown Kamp Massacre is a decent entry to the killer clown slashers; it's imaginative, funny, and better yet, gory! It spends a lot of time lampooning the elements of everything that makes the sub-genre known for from stereotyped casts (here played as assorted kinds of clowns from emo ones to magicians), to classic doomsayers who try to warn off the kids of a death curse at the lake, only to find out they're going to a different doomed place. Hell, we even have gratuitous nudity and, check this, "clown sex"! (Much to cater your clown fetish, ladies and gentlemen) With all of this, the film plays itself like a big joke on the genre while at the same time weaving a fun ride for us to enjoy.  And better yet when the killings finally starts kicking in, it doesn't stop delivering the goods.

While some are pretty stale (a hanging is perhaps a little too basic, so are the neck cuts), the rest pulled out some obscure ways of killing like a trombone stabbing and a TNT stick filled cream pie! It's funny in a cheesy manner and good enough that it even showcased some really nasty and brutal murders. 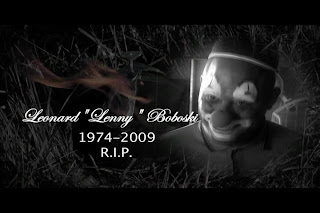 Now while it is a passable slasher flick, the only drawback here is that it may had gone a little too far with the nods and winks that they forgot how to do it right. While the murders and the build up is basically Friday the 13th, even redoing that camp fire tale scene in Friday the 13th part 2 (with a hilarious result), it lacked some personal surprises all through out in terms of being a genre flick, aside from its casts being, well, clowns. Even if they did, it was in the last few minutes and even that didn't work as well as one would hope for.

The twists is the only big "gamble" here; it could be a good laugh for some, or a piss on the wound for others; while the seasoned watcher would be a little familiar to that kind of ending, the problem here is that after all that build-up and murder, it's a little out of place, hurts a few continuity, and a bit mean-spirited. Either way, the film is still a watchable little oddball and plays most of its cards right even with its own set of short comings. In fact, if one is willing to look pass the twist ending, it's still a decently made and thought-through slasher film made just for the purpose of entertaining us. Punny that they're clowns too! (get that? "Punny"? "Funny"? haha! ha...eeeeh....laugh fool!)

Released by Troma (but thankfully not made by them), Klown Kamp Massacre is a fairly great flick to watch with your bundles of bored friends. Just bring on the beer and munchies and you got yourself a night of laughs, gags and Clown Sex!