It's More Violent. And Shittier: Violent Shit The Movie (2016) 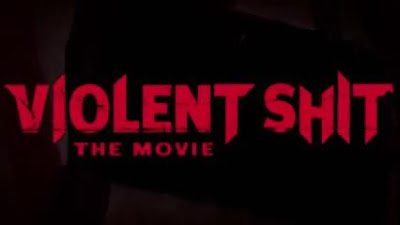 Well, shit. This just had to happen, right?

The original Violent Shit was released in the very late of 80s Germany, directed by underground gore film aficionado Andreas Schnaas, which tells the tale of a random madman simply going about hacking and dismembering victims left and right. And that was it.

What the original lacked in story, it makes up with copious amount of gore to the point that it may have reinvigorated the German underground shock genre, as well as landing Schnaas in a position as an underground cult favorite wherein he continues to create gore films, among my personal favorites being Anthropophagus 2000 and Nikos The Impaler.

Now, unlike the original, Violent Shit the Movie painfully yet failing in any means imaginable tries to have a plot; apparently the main killer from most of the Violent Shit entries, Karl the Butcher, disappeared some time ago and was never caught. When a string of similar murders start popping up in modern day Rome, however, a pair of detectives, German investigator Hans Ebert and Italian Aristide D'Amato, were positive that the culprit is none other than Karl himself. Though this claim was met with skepticism among their colleagues, the duo head on and began looking into this possibility.

All the while, we soon find out that a strange professor had acquired Karl and been keeping him to be resurrected again and again to kill off people. Why? Coz reasons. Just, reasons. No explanation given. He probably just gets his rocks off from seeing gory mayhem and random killings, but if the film had provided any shred of reason for this bald shmuck to keep a supernaturally gifted killer and controlling him like a meat puppet, I apologize but I probably missed it from all of that useless and awkward dialogues.

With the movie starting off with a retelling of how Karl made his first kill as a child, I was looking forward to an updated and possibly more structured retelling of the original Violent Shit. Instead, this is some sort of sequel/midquel that takes place in a different stomping ground, which shouldn't be a problem if only the dang plot makes a whole lot of sense; in fact, the whole supposed murder mystery angle is really just one big red herring as all it was leading up to was just a barrage of gory deaths for the sake of gory deaths. No consistency. No reason. Just people being butchered by Karl the Butcher and just that. For its' worth, these were really great kills. A good dose of gore and special effects were used for the massacre and this is perhaps the movie's only highlight, but why are we forced to wait a good hour or so before a film called Violent Shit give us violent shit?

In fact, why is this a part of Violent Shit's franchise? Karl the Butcher is hardly here and whenever he does appear, he's some bald shmuck's minion? I barely have any respect for this killer but after seeing this dreck, not only is it gone, it's existentially absent in my world. As in I don't know any Karl the Butcher anymore.

Add in terrible acting, Italians (and a few Germans) awkwardly trying to speak English on a tone, near sluggish pace, barely any real action in its direction, and worst of all, the audacity for them to use Claudio Simonetti's awesome score from one of my guilty pleasure Dario Argento giallo Opera, this film is an insulting piece of shit that literally killed any interest for me to see any other Violent Shit movies. I don't really know or understand why this even exists, but I guess some folks just love this series enough to beg its creator to keep pushing forward. Not a bad thing, again, but perhaps Mr. Schnaas could have found someone more...competent?

Yeah, let's go with that.

I apologize for anybody who is forgiving or hardcore of a fan enough to like this, but it takes more than gory deaths to make me respect this. Violent Shit the Movie is just plain shit.