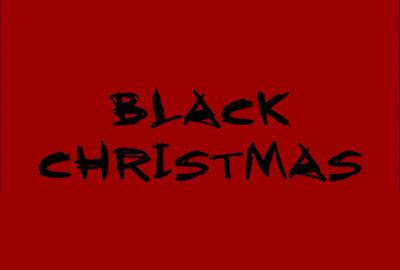 Oh my, how dreadful! Gore? Nudity? Flashbacks? Skin Diseases? This isn't Black Christmas I knew and loved! This is a gore movie! Gone is the creepiness. Gone is the intense build up. Gone are every. Single. Thing. That made the original Black Christmas the ultimate feel bad Holiday flick!

...But God in heaven, this remake is just too GOOD on its own!

We open with a girl lonesomely wrapping Christmas presents and penning names in dedication. She sips some wine and all the sudden, her pen goes missing. Way before she starts looking around, a blonde figure in red PJs wraps the girl's head with a garbage bag, viciously suffocates her and sticks the lost pen into her eye.

The next scenes jump back and forth in both chronology and location, making clear early on that there'll be two killers; Billy Lenz, an infamous spree murderer who killed nearly everyone of his family one Christmas night, is currently making his messy escape from captivity and back to his house-now-turned-sorority den, while a mysterious blonde in red PJs is busy making gory chow out of the college gals.

All the while, the rest occupying the den (young, snobbish teenagers and their house mother celebrating Christmas) share a few discussion regarding their annual sorority tradition of giving Billy Lenz a present. Along the way, a storm brews in (as always), more people are killed off both from the past and in the present, all until it is clear that Billy's back, making sure everybody is home, his home, for Christmas.
Like I mentioned, Black Christmas (2006) is nothing but a senseless, trashy, curveball to everything holly and jolly around the holiday, losing everything that the original built from its direction to the use of simplified yet disturbing imageries. But, as much as I hate to admit it, things have changed for the horror audience with all the grue and torture porn littered upon Black Christmas 06's release, so the same creep and sneak tactics may had no chance against the ever changing time. So what else can a remake do but to adapt and gore it up nasty to fit in with the crowd, right?

By all standards, Black Christmas 06 relies on the basic T&A, copious amount of cheese, and bloody good mayhem that honestly looked great. More mean-spirited by means of brashness and cruelty, we are treated to one intriguing origin story of one of the movie's namesake killer, Billy, who was not only born with a rare kidney disease that gave him yellow skin, but witnessed the murder of his father by the hands of his own mother and her lover before being locked up in the attic to prevent this dirty little secret from ever coming out. Worse, he's raped by his own mum and later fathered an inbred girl named Agnes. These events eventually broke his mind into slaughtering nearly everyone of his family, sparing his sister/daughter.

His story pretty much sets the backdrop for everything that is happening in the present, as we try to uncover who's killing the girls while Billy makes his way back for the holidays.

And if that little number isn't bad enough, dig their marketing strategy: not only did they released this film near Christmas day (no, not by a month, but by days!), they also spring another controversy by being anti-Christmas, pointing out how "paganly" the holiday really is. As a lapsed Catholic, I can't help but think how all these traditions seems a little...different from Christian. (Not that I'm complaining of course!) Well, higher power or not, the movie flopped the box office and inevitably brought upon itself an angry mob of not only mums, but of fans of the original, too. Ah the wonders of marketing~

Honestly, I love this film almost as much as I would love the holiday itself but it's far from being a masterpiece. It's there alright, every bit that makes the ultimate slasher experience, but not far enough to bring anything new to the genre. Yet, it doesn't stop itself to be really entertaining in a braindead fast-paced way. If you're looking for a more thought-out Christmas slasher, then I suggest you look for my all time fave You Better Watch Out or Silent Night, Deadly Night for your kicks. But for the mean time, how about you open up some chartreuse and try seeing how good this film really is.

Loud, rude and a lot more grue than a disemboweled cow, Black Christmas (2006) thrives on our deepest desires for the messiest Holiday Slasher around. Hell, it's not perfect but have you seen anything else like it?