Life And Times of A Middle School Avenger: Liverleaf (2018)

I came for the gore, I left with a teen psycho-drama. But hey, at least it came with a gory bodycount!

Haruka Nozaki (Anna Yamada) is a transfer student who somehow found herself on an on-going bullying end perpetrated by a notorious gang of delinquents and egoistic posh girls. Some of them justifies this as payback for stealing a boy from one of their friends, others are just in it for the sadistic enjoyment of it. Regardless, it all escalated to dire proportions as one day, Haruka's home catches fire, burning her parents dead and leaving her sister in critical condition. Traumatized and emotionally drained despite the efforts of a few kind souls, including fellow transfer student Mitsuru Aiba (Hiroya Shimizu) as well as her grandfather who takes her in, Haruka can only think of one thing to make things even: murderous revenge.

Clocking for almost two hours, Liverleaf (2018) was adapted from a 20 chapter manga of the same title (Of sorts. Alternative titles apparently include Hepatica) by Oshikiri Rensuke and the movie is best described as first half slasher and second half psychological horror drama. While the comic has a narrative that jumps back and forth via flashbacks to flesh out its characters and the situation, the movie squeezes the narrative to a single direction of varying pacing in which we get to spend some time first focusing on the kind of abuse our protagonist and her parents are going through, cementing the kind of wretched monsters the bullies are on their own. This pretty much sets the slasher film-style bodycounting part of the plot and, in all honestly, its as glorious as it can be with all of the bloodletting, gore and grimly satisfying comeuppances the victims have to suffer through.

The moment the "disposable" victims got taken care off is when Liverleaf (2018) slows down into an entirely different creature; now centering itself around Haruka, Aiba, the bullies' ringleader Taeko Oguro (Rinka Ôtani) and a very disturbed secondary bullying victim Rumi Sayama (Rena Ôtsuka), the film twists its course by the second half of its run, revealing more fleshed out motives behind the attacks which in turn developed the remaining four main casts in ways one may not have expected. New monsters get created. Supposed antagonists turn to a new leaf. I truly have no qualms over this  but I just felt that some of these curveballs felt unnecessary for their randomness and/or how little they work with the story. Yes, I am aware that this is how the comic went down and, yes, I know that some of these "surprise villains" claim they ended up that way because of abuse, which is in par with the anti-bullying message of the story, but seeing how little solid clues were given to build up and earn this turn of events in the movie despite all of that running time made a bulk of these twists feeling rather cheap, desperate and borderline cheesy.

Production-wise, Liverleaf (2018) is, nevertheless, still strikingly gorgeous despite the violence and depressing undertones as its cinematography worked a lot on contrasting its white winter backdrops with the red splash of practical red corn syrup and CG-assisted splatters, elevating the intensity of the killings and stalkings one can already get from a snowed barren wasteland of a small town that's slowly wallowing in its own filth, figuratively and literally. And with some of its camera-work acting as a secondary blade to play around with the violence of the film, I can't help but feel amused by the stylish implications done to this movie's killings.

The music also played its part on enforcing quite a fitting score that changes from subtle lighter tones to that of evoking feelings of mayhem and liberation, if not both. Acting is no short of being okay from all of the talents involved, too, but I could have given it a more passing hand if only the movie found a way to properly build some of these characters to be more than one-note pathetic bullies deserving to be cut up with a knife in a slasher flick.

Gory and Moody, Liverleaf (2018) may not work all the way, but it has a considerable weight as a fantasized revenge drama drenched in blood and guts. So if you're in the mood to watch some old fashioned bully hunting with some attempt of character building in a manner of a late afternoon TV soap, best to give this a shot!

Bodycount:
1 male and 1 female burned to death in a house fire
1 female gets a nail to an eye, beaten to death with a pipe
1 female had a heel cut, trips and lands head first to a debris
1 female beaten to death with a pipe
1 male stabbed and cut with a knife, broke his legs on a fall and left for dead
1 male shot through the head with a crossbow, stomped on the face
1 male eviscerated with a knife, neck stabbed
1 elderly female dies from stab wounds
1 female shredded through a snow macerator
1 female beaten, stabbed on the throat with a branch
1 male shot on the eye with a crossbow
1 female bled to death from a stabbed gut
Total: 13

Note: Left out some possible survivors as no confirmation whether they passed away or not were given.
Posted by Kaijinu at 11:20 AM No comments: 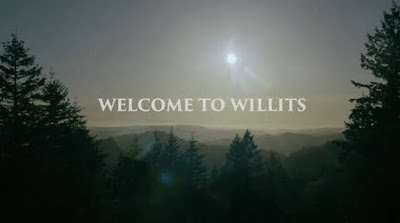 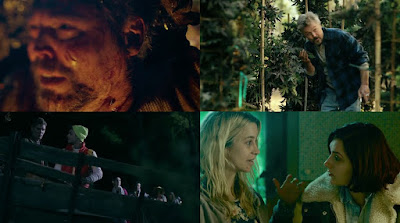 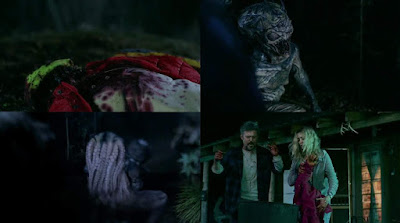