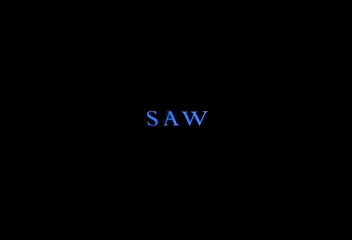 Two men woke up chained by the ankles to the thick piping of a dirty disused bathroom; both have no idea how they ended up there and they're both given a cassette player with a specific tape labeled for them. Between the two lies a murdered man with his own player and a handgun.

As they play their tapes, they learn that the only way for them to get out of their predicament alive is to kill the other by 6:00 or both of them will die. Trapped in a web of mystery, with time slowly closing on their fate, they soon realized they're the newest target of a madman obsessed with "helping" people recover under the belief that under a great amount of stress, a man is forced to fight for his life and finds a form of new appreciation for it. When one of the men learns that his family is in the wager, and the stranger he is with was involved in his life somehow, it soon escalates to climatic proportions that soon tests their trusts and will to survive.

Ironic to say the least, despite being the starting point of new-age torture movies, the "games" the Jigsaw killer had here were simpler yet dangerously clever that's cringing not because of the blood and gore, but because it's disturbing to sit through ala Grand Guignol and the scenes involving them had this chilling tone in it. Something that the gets blurred with each sequel made for the franchise as the traps became increasingly complex.

Instead, SAW creates an intense scenario between the two men, a brewing suspense that the film started to boil from the very moment they get to know each other, as that certain feeling of distrust can quickly shifts to something unexpected given that the men fails to work together.

SAW is one tough genre to beat as there's certainly nothing like it; it's crafted with enough blood and screams to keep any horror fan happy and enough killings to keep bodycounters such us myself jumping on our buttocks. If I had to point out any flaw, it has to be that it still suffers a few weak scripting; some scenes that just doesn't work, a few characters underdeveloped, and the film's awfully misleading in its marketing. Despite being labeled as the new "Se7en", it's far from a serial killer thriller; with its ghastly images, primary focus on the viscera and it's near absence of law enforcers put SAW's obscure murder set-pieces and situation in pure horror fiction territory, as movies like Se7en and even Silence of the Lambs had their sense of realism in them.

Thankfully, this film's biggest redeemer is its own twist ending. No one had seen it coming as no clues where given even upon a second viewing; it literally came out of the blue yet it perfectly tied (almost) all of the loose ends that surrounded the film. It's almost worth looking pass any flaws this film failed to fix. (Then again, this was James Wan's first feature film, outside the short that started it, SAW 0.5, so a few short comings is inevitable)

For an indie film, it sure did a lot as one of the few titles that changed the name of gore forever, and too, the fact it end up as a massive franchise of seven films and tons of merchandises! A must see semi-classic of sorts for every newcomer to horror.

bodycount:
1  Male slashed to death by razor wire
1 Male smothered with flammable gel and set ablaze
1 Male stabbed and disemboweled with knife
1 Male had his head shot off with trip-wired shotguns
1 Male shot
1 Male bludgeoned to death with cistern cover
total: 6
Posted by Kaijinu at 4:30 PM