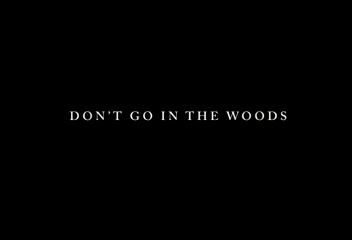 While most horror-enthusiasts (or to be more precise, most people) I know don't like musicals, I for one enjoy them in a tolerable way.

Countless are the times I sing-along to movies like Grease, Hairspray and Mamma Mia, and it is always a daydream fulfilled to see music and mayhem together in the form of a horror musical, though I can only name three (or four) titles that got me loving their catchy tune all the while being thrilled by their bloodletting and horror imagery: Sweeney Todd: The Demon Barber of Fleet Street (2007), REPO! The Genetic Opera (2008), and Rocky Horror Picture Show (1975). (The fourth would be Splatter Disco, but I find it hard to see their songs to be that memorable as much as I find the film funny).

Don't Go In The Woods (not to be confused as a remake of the horrid backwoods slasher in the 80s), markets itself as a horror musical, though I beg to differ: musicals are films that use songs to tell their tales. Don't Go In The Woods is just guys singing songs that have nothing to do with the story other than the fact that they're either practicing or writing it.

I was expecting REPO! style musical mayhem but all I got is an emo band jamming in the woods, trying to use the isolation of the forest to get a clear head and write an inspired hit. Only, not all of the members are up for the idea and they tagged their girlfriends and girl friends, leading to the usual campground trysting and upsetting emo-lead since his plan isn't working out. However, the worse is about to come when what appears to be a killer pilgrim in a hat, armed with a deadly sledgehammer, arrives and sets on offing them one by one. You can pick up what would happen from here on.

The songs and a few of the signing scenes are good, I'll admit. Some of them relaxing and soothing despite a little amateurish, but there are also the irritable bunch that didn't sound or look that good for the reason they're executed in the dumbest way. For instance, we have a foreign girl trying to yell murder only to break into tears and start singing in her native tongue for God knows what reason. (Thank you Satan, the killer got to her just in time to end it) Then there's the completely loco solo performance of the lead who just suddenly decided to stop and jam while a killer's out there, chasing them.

These dumbasseries are watchable at times as goofy set-piece, but a whole film that is just a collection of these stupid moments can't hide how messy it is. It's one dumb choice after another, showcasing the silliest cheese there is and the most unsympathetic and soulless characters ever to be made. (yes, that includes the emo-lead) It tries to lure us with some red herrings involving hunters with guns and even the "true story" about the Wendigo, two potentially good villains, only to be never spoke of again. The only thing that saved this movie from being completely unwatchable is the last 20 minutes or so, when it finally catches up on being a slasher and it's one brutal hammer kill to another that's pure eye-candy for me, ending with a slightly confusing but clever twist that explains why they're in this predicament in the first place.

In fact, if it wasn't for the confused attempt to make this to a musical, this would have been a decent, if not over-the-top backwoods thrill flick. I can't say if it's a bad film, cuz, I kinda liked it for the reason it made me laugh as an unintentional cheese-fest, but seeing it is trying to be a straight horror mixed with a form of higher art with barely workable results, it's not worth recommending. I'm just gonna say that, if you are planning on seeing it, don't expect too much and don't take it too seriously. If you do managed to like it, I'll be more than honored to shake your hand and buy you a drink. On the house!