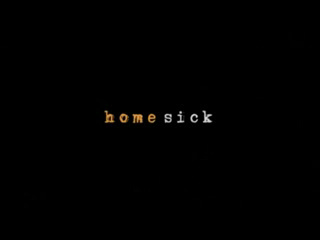 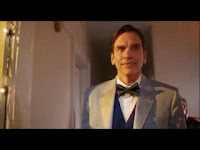 I'm a big fan of Bill and seeing how often I fall victim to faulty marketing, I have to pay the price of getting another brain cell removed as I watch this guilty pleasure.

Home Sick starts off sleazy; a weary looking feller wants a night of limitless pleasure with his gal pal (which seemingly involves peeing into a partner's mouths. Eugh!) and strolls off to a convenience store to get some supplies. When he gets back, he finds his partner hacked to pieces in his shower and he soon joins her in fate when a gloved killer sticks a knife through his head. Good stuff, yet a tad slow. 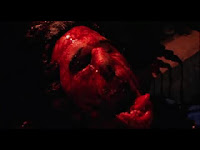 Now, traveling back earlier that day, we join a bunch of emo-wannabes in goth attires, spatting dialogues from hell (slow, sluggishly paced dialogues) and often whining about how their party sucks with just them, or how their love life is going down the toilets. My prayers for an immediate slaughtering get answered when Bill Moseley enters as Mr. Suitcase, a man who, as the name suggested, carries a suitcase full of razors which he uses on himself in a rite to summon a vicious killer who would go after their most hated enemy. Intense moment. Okay I'm digging it. 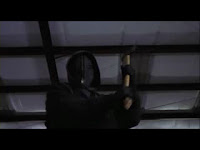 We then got some killings done, until it slows down again when all their hated targets are officially killed off by a mysterious masked killer and they're next to be picked on. Not wanting to overcomplicate the matter, they ditched the idea of calling the police and head straight to a friend's father, a chili enthusiast and gun-totting redneck.

Wait, which one's safer again? The police or a near psychotic family? Well, it doesn't matter, coz masked killer gets by anyway, revealing he's something more than just human and soon more bloodbath ensues. wherein the killer's willing to break a few rules to up the bodycount for us. 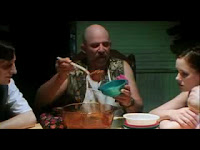 Home Sick is generally a gore film of the drug-infused nature reminiscent of the 70s exploitation slashers and EC comic eccentricities. It's loud, brash and surprisingly messy, accompanied with a dream-like story telling with an equal art-film feel to it, escalating to nightmare territory the further it goes. Albeit some would love the plot's crazy attributes, I can't help but feel confused once in a while since the plot has enough holes to daze or annoy; for one, if the killer's only after targets who the teens claim they hate, then why kill off people who were not even mentioned? This is practically what happened towards the end, where everything just went berserk as characters are killed off not only by the killer, but also by the estranged family that was supposed to help our characters. And then it all just ended so abruptly that I can't help but feel the producers didn't really knew or care what they're doing with this. 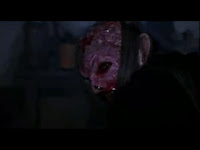 There's not one sympathetic character in it, with most of the casts being butt-holes who looked like they're into drugs and booze, no redeeming personality or no dimensional realism. Just plain obnoxious little shmuckers and asshole bystanders who are there for the killing. 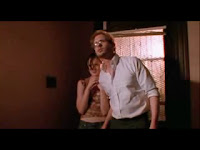 Home Sick had potential if it didn't lack the creativity of executing its simple story of a demonic killer and wrist slitting madmen. But too much inconsistencies, too much overacting, too much dumb choices, and definitely too much of the weird, got us all rooting for very little in the end. Thankfully, there is gore. Deliciously, non-CGI, practical effects gore that swims in its own putrid stench to keep gornoholics happy. If latex skin being hacked apart and corn syrup blood flowing like rivers are your thing, then watch this for the the effects alone, it's the only awesome thing about it.

If you're gonna watch this for story, then I guess I'll meet you there at the end and we could talk about all the things we've learned and how to avoid them again...

Bodycount:
1 female found butchered
1 male knife through head, exits to mouth
1 male had his head stomped against stairs
1 female killed offscreen
1 female found with her head split open
1 female brained to death with hammer
1 male found disemboweled
1 male hacked in half with axe
1 male clawed open and disemboweled
1 male had his head ripped off
1 male clawed through the head
1 male shot on the head with shotgun
1 male shot with shotgun
Total: 13
Posted by Kaijinu at 6:33 PM