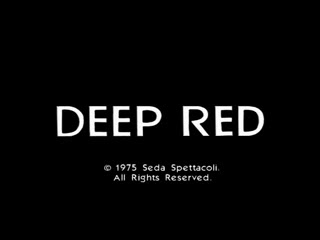 When an English pianist (David Hemmings) living in Rome witness a viscous murder of a psychic who, only hours before, felt the presence of a madman during one of her lectures, he inevitably becomes a part of an investigation to unravel the identity of the killer. But the further he gets in solving the crime, more he becomes the homicidal obsession of the killer, who's willing to rid of people who gets in their way.

Thus starting us off with another Dario Argento classic, by far the one title that shares the same grand class and acceptance among the horror community as with Argento's supernatural giallo hybrid, Suspiria. Made after finishing the Animal Trilogy, a set of gialli made by Argento which includes Four Flies on Velvet Grey, Cat-o-Nine Tails, and Bird with a Crystal Plumage, Deep Red shows traits recognizable from these set of gialli such with the idea of "memory over suspicion", wherein a tiny overlooked detail in one's memory can easily solve a murder rather than overlooked red herrings, and the popular use of striking imagery that will soon become a staple visual style of most gialli, primarily discordant soundtracks, odd angles, rolling cameras and various lighting techniques.

The movie is visually stunning and colorful, albeit a ferocious picture that has a level of bloodshed more extreme compared to the Animal trilogy, with much attention to details and symbolic close ups of a hanged dolls or an array of toys littered next to a set of blades, eyeballs, and random animal attacks. The shots often depict an upcoming situation, acts as a clue to the killer's identity or how a victim will meet its demise, again becoming a signature style associated with Argento in his prime.

If there are any flaws one can consider, Deep Red has a wayward flow where it spends a lot of time on certain scenes that are just a little off track from the investigation, falling either as a dead end or an overlooked piece of evidence. However, it makes up for these lengthy scenes with an elaborate set-pieces of violence and suspense, using detailed build-up and enough visceral savagery to these extended murders. One well known and most recognized scenario was the murder of a psychiatrist wherein, alone in his office, he had gone uneasy and starts viewing through the windows, as if he is aware of being watched. As the soundtrack intensifies and ceases to a halt, a large mechanical wind-up doll suddenly springs out and hacked apart with a knife in shock. Not known to him was that the doll is just a distraction and killer appears from behind a curtain, bashing his teeth in against a mantelpiece before he got stabbed with a knife. This is one of the many scenes of the movie perfectly capturing suspense and horror with much Grand Guignol theatrics and sentiments.

Perhaps another highlight about Deep Red that makes up for any flaws would be that it marks the first collaboration between Argento and his soon to be staple soundtrack rock band, Goblin. It is fun to note that Goblin's Deep Red theme became the influence of John Carpenter's own Halloween theme, as so did the primary use of subconscious tracking that moves along with the film. Even if the score sounds repetitive and isn't well blended, it gave as much essentials to the film as a theme, being one of the few movie of its genre to fully embrace music as an identity.
.
Beautifully constructed in every way, undergoing to a completion that falls in place quite fluidly, it's a tad sad know that, seeing his recent efforts, Argento can't seem to so something this complicated yet workable. The brutal, gothic, connotative, thematically artistic, and surreal nature of his older works may have been lost now, but at least we have Deep Red to remember by, as a sheer triumphant work by all means as an Italian thriller.

Bodycount:
1 Female hacked repeatedly with cleaver, head crashes through window and gets a throat cut on shards
1 bird accidentally flew through a knitting needle
1 female forced face-first into a tub of boiling water, scalded to death
1 Male had his teeth repeatedly bashed in against mantlepieces, knifed through his neck
1 Lizard glimpsed impaled on pin
1 Male had his head ran over by incoming car
1 Male knifed on the back
1 Female decapitated after her necklace got caught on a descending lift
total: 8
Posted by Kaijinu at 4:27 PM