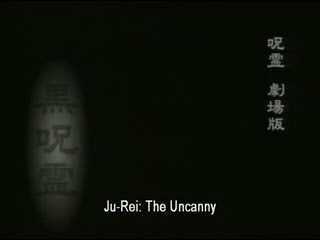 I took a gander on  Luisito Joaquín González Martín's Slasher blog the other day and saw something unusual in his slasher list. Though he doesn't include Candyman, A Night mare on Elm Street and Final Destination movies as a slasher, he included this foreign title in the pile  and it sticks out like a, well, stick in the sand. While not as strange as his reason for not considering the three aforementioned franchises as a part of the bloody family, Ju-Rei is a mishandled yet staple J-Horror with an unique build-up that's just as weird.

Told in a reverse chronological order, a set of ten "chapters" and a prologue tells the tale of a single day's haunting that took the life of thirteen individuals, committed by a strange force that takes the form of every person it kills. The thing about it is that each victims are connected to one another, and how and why the ghostly figures are after them gets revealed bit by bit in each chapter.

As I see it, it's more of a cheap-ripoff of Ju-on: The Grudge (2002) than a slasher, but the way it's structured does have its sticky red flavorings. Although the "kills" are simple draggings or death by heart attacks, tamed due to it's minimal budget, the emphasis here is more on the stalking scenes coinciding with the typical J-horror scares of long-haired ghosts, unexplained noises, figures standing on corners, etc. It's creepy as it is at a bargain price, the film's lack of visual effects giving it an uneasy feeling, however it can't really compete much to other J-Horror titles as it lacks strength in solid plotting and originality. We follow one kill to the next in each chapter until the prologue happens, yet I still feel hanging in the edge and hardly satisfied.

Still, I do love a good effort and it's rarely boring from where I stand, just lacking that certain conclusive feel to it. Too many plot holes, some very lengthy scenes and very little creative haunts may fail to succeed, but the neat mix of decent scares and tension won my acceptance.

Recommendable? I gander twice on this film to say it could be but J-Horror fans will definitely enjoy this. Or not. I still believe it'll all depend on one's taste. Slasher fans will be disappointed by its lack of blood and nudity and gore and, well, all the things that makes a slasher film a slasher, but if you open up a little, you might have a decent one night's renting. (In case I'm wrong, go rent a second movie you know you'll enjoy...)