The House of Transcendental Boredom: Boardinghouse (1982) 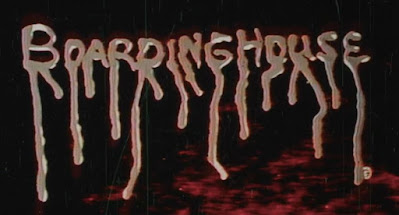 Boardinghouse (1982)
Rating: *1/2
Starring: John Wintergate, Kalassu and Lindsay Freeman
Boardinghouse? More like Bore Me House!
...Look, I'm drained tired trying to watch this movie from start to finish. I am not bringing my A-Game puns for this one!

Through an irritatingly loud early 80s computer graphics, the film starts by bombarding us with exposition upon exposition about some family called the Hoffmans who studied telekinesis and occultism because, hey, I'm pretty sure nothing bad ever happens from meddling with the two subjects under the same household, right? Right? Well, color most of us unsurprised, the folks were found dead one day and their eldest kid goes bananas from an emotional breakdown. Since then on, the house got sold and resold as it becomes a hotspot for fatal accidents, killing those who step foot in the hospice.

One of these unlucky meat bags just happens to include the house as a part of an inheritance package for their heir, Jim Royce. (played by director John Wintergate) The place goes from haunted to "hot damn!" as Jim turns the estate into a party haven for the ladies where he is the acting den mother, which is not a bad arrangement so long as they don't mind the man's weird meditation sessions, supernatural ability to move objects with his mind and his wardrobe choice of animal pattern speedos. As the ladies sunbathe, get wasted in quality wine and have steamy shower scenes, someone or something around the house isn't happy with the new living arrangements and it's damn well making it obvious with the sudden surge of demonic visions, bloody accidents and, well, gruesome deaths happening all over the house!

With a production that resembles something an 80s swinger would make at their own backyard with their girlfriends, Boardinghouse (1982) is often cited as one of the earliest, if not the first, example of shot-on-video horror films and with its abundance of strange editing, nonsensical plotting, terrible audio and lighting and select actors with talents comparable to a 70s pizza place's animatronic, all the known restraints from a shoestring budget production, it's not hard to picture why. What does work here, though, is its hilariously dumb cheese factor and a level of determined creativity that comes paired with it; while the implementation is laughable, I do have to at least give credit for the film for trying to do something unique for its haunted house-cum-slasher melting pot of a story, tossing in killers with mind-control powers and lethal telekinesis, as well as not skimping on the blood works and gore effects in its attempt to be a competent horror flick.

The over and underacting also has its unintentional hilarity, which goes the same for some of the cheap spectral effects done for the movie's more supernatural inclined scenes that undoubtedly show the movie's age. Frankly, I really want to like this film for dumb moments like these, but the matter that it paces through one random big house escapade and pool party jig to another before doing something remotely interesting is just a big gut punch to its entertainment factor. By the end of it, I'm simply tired from all the people idling around and bullshitting, too frustrated to completely enjoy this film's idea of a climax wherein three people are just standing in a supposed "telekinetic battle" (complete with dry ice), inflicting hellish agony to one another as indicated by the warping screen and the actors comically scrunching up their faces.
Seeing how Boardinghouse (1982) developed some form of cult following over the years, it's safe to say that, perhaps, this film is just not for me. I can appreciate a movie's hokey premise and chunky corn-syrup gore but, at times, it's simply not enough to look past its direction and pacing issues. For those who can, then I guess this is your movie, you crazy lot. Seeing it once is good enough for me... 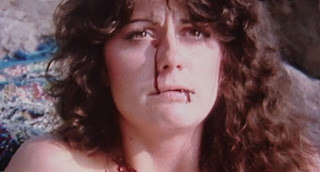 Bodycount:
1 male drowns in a pool
1 female had her arm shredded through a sink garbage disposal
1 female hanged with a length of knotted stockings
1 male disembowels himself
1 male electrocuted in a bathtub with a live hairdryer
1 female suffers through spontaneous bleeding, drowned in the ocean
1 cat hammered to death
1 female shot to death
1 male shot on the head
1 male stabbed in the gut with a thrown lawn dart
1 female plucked out her eyes
1 male had his heart levitated out of his chest
Total: 13
Posted by Kaijinu at 4:50 PM 2 comments: