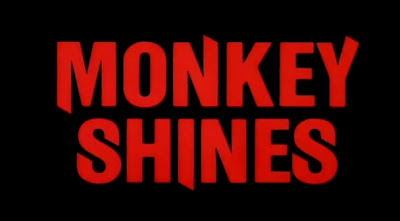 In celebration of one George A. Romero's birthday, I'm going to tackle this little monster of a unique thriller. About a man, his monkey and the danger he got himself into unwillingly.

Alan Mann is an athlete turned paraplegic after a run with a truck, an accident that spirals him into depression to the point of attempted suicide. As a way to enlighten his friend's sudden condition, Jeff, a scientist who's experimenting with fusing human brain tissues to monkey's, gives Alan one of his test primates named Ella as a helper, which grows a quick attachment to the former sports star. In turn, Alan accepts her company since she does make his life easier. 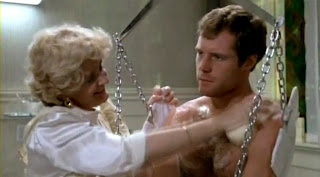 Soon, Ella appears to be developing a telepathic link to Mann's emotive rages as he smites his friends and family for reasons both real and imagined. This becomes more complicated when Alan falls in love with Melanie, a specialist in quadriplegia and helper monkeys, sparking Ella's jealous rage. When Alan is informed that his condition is irreversible, it all goes for worse as Ella starts picking off those Alan deems responsible or worthy of his anger, one by one.

While not entire his best work, George A. Romero created an intriguing entry to the killer animal genre with Monkey Shines for the means that it focuses more on the emotive side of its human characters instead of the animal attacks, bonding a lot of the story's dramatic connection with the audience as we feel for Alan and his condition. His emotions, whether it's empathy for himself or the fact that he's completely depressed, is arguably understandable as he was the bread winner for everyone he knows, now reduced to a helpless cripple who's shame of becoming a burden soon boiling up into blind fury. 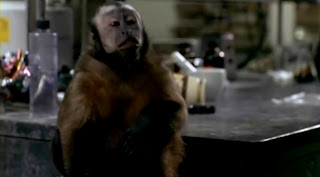 Now, the monkey concept in this flick is new for its time and quite clever. Starting first as a lab-rat for an experiment, Ella was the only creature that actually care wholesomely for Alan as her decisions are real due to her having a near-human intelligence. It was all for her master and she finds sympathy from the very man she serves so when Melanie come into the picture, its psychotic jealousy is unleashed and no one is safe, not even Alan in a climax that echoes the likes of Misery.

While predictable at some point and the idea can be too absurd for many, it's still an imaginative piece that has enough thrills and suspense to keep anyone in their seats in anticipation. You can tell something's bound for worse, but rather than showing the terror immediately, it brews our anticipation for it. 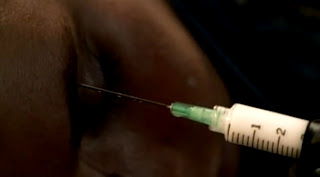 The murders are nowhere special, but the attacks are pretty nice to watch and handled well. So goes to the acting, mostly with Jason Beghe who had to rely a lot on facial acting since he is supposed to be a crippled individual. Some points of the film were a little unnecessary, such as the idea of telepathic linking of Ella and Alan as the idea felt underdeveloped and the whole film could had gone through without that context.

This is one of the many films that I saw as a youngster and I recall that, while showing it early in the morning at a local TV channel, my mum saw me watching it and asked me to watch some cartoons instead. I find myself chuckling every time I remember that part of my life, but she did have a point; while it certainly not the finest film of the decade, Monkey Shines is still a slasher film of unique taste and take. You'll never look at Capuchins the same way again...

Bodycount:
1 parakeet found killed
1 male and 1 female burned to death
1 female electrocuted in bath tub with a plugged hairdryer
1 male gets sodium compound injected into his nape
1 female monkey had her back bitten and crushed to death
Total: 6
Posted by Kaijinu at 2:10 PM