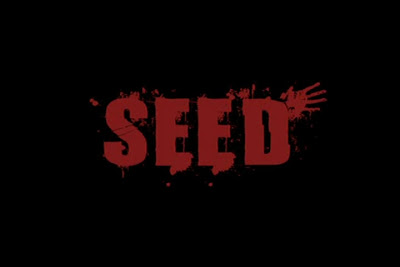 If there's one guy I want to stop making films, ever, it's Uwe Boll. Let's face it, not one single movie he made can be counted as a classic unless you're the kind of guy so easily entertained by lame special effects, very thin plot and cheap productions all in all.

So then he tried to get his grubby hands on the slasher/serial killer genre and gave us Seed, the story of a man named Max Seed who has the habit of kidnapping people and starving them to death in his basement while recording the whole ordeal on tape. He was captured, convicted and sentenced to be executed via electric chair but after he survived the execution, he was instead buried alive while he was still unconscious since, according to state law, anyone who can survive that is a free man.
But after biting and clawing his way out, he start to exact bloody vengeance on all of those responsible for his capture and burying him alive. And I mean very bloody.

Now let me start first with what I appreciate in this movie: Max Seed for one is a cool looking killer. Robust yet silent, he barely says a whisper and kinda looks like young Thomas Hewitt AKA remake Leatherface during his early, pre-skin mask years, which I find cool. There's also two kills that I like here: the baby starving scene, which is unnerving as it is shocking and a very effective looking pike impaling that uses some neat practical effects and a nifty editing.

Sadly, that's as far as I could go to praising; not much to go with here, Seed is a lazy, cheap and tedious walk through the basics of slashers, serial killer and revenge genre. The opening video featuring stock footage of poachers killing animals is just upsetting (it's those kind of people I wanted to butcher) but this might be the only thing worth being upset about. The pacing of the movie is horrible (a lot of stretched out scenes that could have been done away shorter or with better script) and the rest of the murders are just stale. Bloody but stale. There's also some attempt to do some cop drama along the way, but it ain't working if the script lacks material and if the cast are hardly worth rooting for. (not to mention, they can't act either.)

Heck, not even the most talked about axe scene here cut it for me: it's around, what? four or five minutes of me watching Seed beat a CG victim's head with the dull end of an axe before he completely goes ape with it and pulps it completely. As much a I like a good gory kill, this one is too fake looking to enjoy.

It slowly creeps into a finale that sortah inspired the same ending in that overrated Afterdark feature Dread, but the shock factor is gone between all these boring dialogues and uninspired murders, an empty story so draggy that everytime I try to re-watch and pull myself to like it, I always ending up half-asleep, pushing the fast-forward button out of frustration or just stop the whole damn thing and watch Day of the Dead '85 for some reason.

If you're an Uwe Boll fan, go ahead, and take it. Your kind definitely deserves this. Now, if you don't mind, I'm just gonna watch Day of the Dead Again. (Day of the Dead is my happy place...)