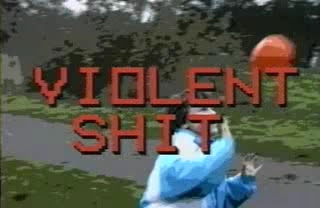 I'm pretty aware of the controversy this underground indie made for itself. I'm also fully aware of the impact and strong cult following this title (and its sequels) has for a lot of horror fans. For me, I wouldn't really mind a bad, tasteless flick every now and then given that it'll hit me right. Sadly, when I mentioned that, I'm actually saying that I would like at least to have some story in said "Bad and Tasteless" flick and I'm pretty much sure you can guess where I'm going for in this review.

Meet Karl, a deeply traumatized maniac with strange oatmeal treats growths coming out of his face. Abused as a child (if that's what you wanna call it), he grew up as a mentally handicapped mass murderer who lately escapes his prison transfer after one of the guards needed to drain his dragon. Karl murders his way out of the three (T-shirt wearing) guards, begins another killing spree and hallucinates Christ-like figures the deep woods for him to hack open and go inside. (Yes, that last line makes very little sense to me, too)

I'll be very honest here; at some point, I enjoyed Violent Shit as a nonsensical splatter movie. I can't really call it a true slasher film since it focused too much on Karl's homicidal rampage, but it does have its moments where you can see the influence. It has a bodycount, yes. A chock full of blood even! But the film is really nothing more than a collection of Karl murdering one random individual to the next with no story to tell whatsoever. I would like to call this movie the Maniac (1980) of the very desperate and trashy people if not obviously cheap death porn.

The producers did at least try to put some class into this film as every now and then, we get this sort-of photo-effect on some of the scenes which actually just adds some unnecessary padding and show how really cheap the movie is. These effects also prolonged some of the kills, making them too overdone even for my taste. A fine example would be this one scene where Karl cuts and pulls a guy in half with a hedge trimmer, which should have been more believable if it wasn't for the fact that the guy's torso seems to have doubled in length. Now, for my end, cutting a guy in half with a powertool is an awesome kill, but do we really need to have the corpse's head cut off and sliced in half? I'm up for long, gruesome murders, but the guy's dead by the time he was cut in half! What was the point of slicing it further?

Other artistic attempts would include adding religious imagery in Karl's rampage, such as his flashback involving him meeting up with Satan who claims him to be his father (might explain the ending. I think) and the sudden appearance of a crucified Christ-figure in the woods which Karl proceeds to hack open and crawl into. (Some sort of allegory on how he tries to be "one with Christ", as in to change his murdering ways?) I don't really see this to be very shocking, honestly, as I've seen enough religious horror flicks to desensitize me otherwise. For me, it 's all desperate attempt for a shock and funny ones at that. (That shot of Karl's leg dangling out of Christ's belly was just hilarious!)

Gore is apparently the film's only aim and even though I'm the kind of guy who'll spend a buck or two to watch a movie that mostly involves killers hacking up a group in very bloody ways, Violent Shit's cheap budget really hindered a lot of big opportunities and the lack of plot direction made all these kills completely pointless. (And no, I don't think watching a woman get disemboweled through the groin up for four or five minutes would reconsider this claim otherwise)

The underground audience, though, clamored for more and Schnaas obliged with a sequel or two following Karl's adventures (well, actually his son's adventures), gaining the reputation to be one of the more well known cult fave from the German Underground horror industry. Not entirely sure if I want to see more of his movies but they definitely have an audience, I'm just not one of them.