The Saw is Family: Leatherface: The Texas Chainsaw Massacre 3 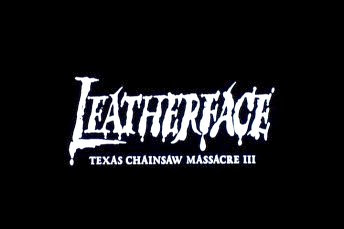 I never knew the wild ramblings of a deranged cook would become a literal reality; around the early 90s, when nearly all slasher flicks lost their taste, there were still some titles trying to kick the almost dead sub-genre back to life with plots that are mostly cooked, served, saved and pre-heated over and over again. Some odd stories, though, did got their way through and little of them would include TCM's lovable cannibal Leatherface getting a more "loving" family.

More of a direct sequel to the original, TCMIII starts off with a meat hammer slamming a screaming victim's face, killing her as the big guy prepares to skin a new mask. Over the window, a hysterical-looking girl watches in horror as Leatherface proceeds with his craft, before she accidentally snaps a twig which made the big guy aware of her presence and the gal running for dear life.

We leave it at that when we switch focus to a Californian couple, Michelle and Ryan, out for a road trip in the open Texan desert and stopping by for some gas. But when the stop's perverted attendant tries to make his way to Michelle, a kind hitchhiker helps them out until the attendant pulls a shotgun on them and proceeds to fire. Scared off, the couple drives through a shortcut given to them by the hitchhiker before the brawl, but as they find out, the trail leads to a deserted forest.

It wasn't long before the couple are attacked off the road and found aid from a concerned survivalist who just happens to be driving by. It soon became clear to them that someone's out there hunting them down and if you know your Texan chainsaw massacres, then you know damn well why...

TCMIII is more of a retelling of the first film, still focusing on the the villain's family slaughtering victims for food as if it's a normal livelihood, which makes this entry also slightly reminiscent of TCM2's outlandish attempt to bring out some color to Leatherface's life, minus the cartoonish feel and with a more bizarre range of characters (though none of them actually have the same flavor of the original clan), including a Texan wannabe-Samaritan, a technology loving hick, a heterochromic loonie with speech impediment and, the oddest addition, Leatherface's own young daughter. (Ah whu?!) The producers actually wanted this to be an TCM entry that stands on its own continuity (disregarding the previous films) but with many tie-ins shown and hinted here and there such as the pre-credits narration explaining the events from the first TCM movie and that slight cameo of TCM2's Caroline Williams, who many fans suggested as Stretch recovering from her horrendous incident (which I highly doubt but accept as a likely theory), as well as the fact that "Junior" here wears a leg brace (Die hard Chainsaw fans would know why he has that), I guess it is safe to say that plan didn't went through.

This being said, I do feel like TCMIII may have given too much emphasis on bringing the clan to light as the two leading couple barely made anything interesting apart from the classic screaming damsel shtick. The inclusion of a Ken Foree as a survivalist, however, did brought a stronger character into the fray. His role here was more like of Lefty's from TCM2, a strong arm of a protagonist whose experience, will to survive, and a mean AK47, makes him a formidable foe for the clan. Funny, though, he was supposed to die in this flick, evidently from his supposed death by chainsaw as we see him get dismembered, but he showed up alive and well with hardly a scratch on his body save a small head wound. Guess fans in test screenings will always have their way...

There isn't much to go around with this one either in terms of slasher antics as you'll probably know your way around it. Murders were surprisingly tame for a movie made in the late 80s, something we can always blame the MPAA for. Hec, if it wasn't for them, this one would actually had a naked guy hung upside down and get sawed in half!

In the end, TCMIII is hardly a step up for a franchise entry but it's no short of an entertaining piece of slasher goodness in terms of premises and ghoulish humor. It is practically nothing more than a Texas Chainsaw Massacre with its killer living with another "quirky" (and yet at the same time, one dimensional) family, with my only gripe with it being that it can get a bit draggy in both horror and non-horror scenes and it could really use some more gore and chainsaw action, but what else can we do?  Least it made a lot more sense than that harking 4th sequel...