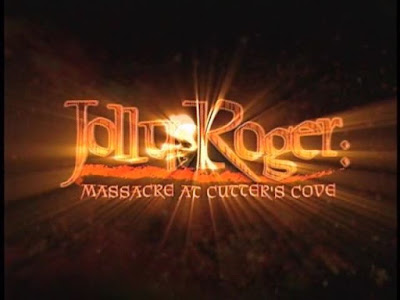 Homicidal clowns, maniacal robots, avenging wildmen, and even Bigfoot itself. What else can we throw in as a slasher villain?

How about a supernatural undead pirate?

Technically, if one would consider John Carpenter's 1981 horror flick The Fog a slasher (or at least a slasher/ghost story hybrid), this isn't the first time we have undead pirates causing havoc and bloody killings. But unlike the mushy foggy specters of Carpenter's semi-classic, the titular monster here's closer to your standard quip-talking B-grade horror villain, which is either cringe worthy or funny depending on your taste for slasher flicks.

At the seaside town of Cutter's Cove, six teenagers were having fun that night until two of them decided to up their game by, what else, having sex. Whilst looking a good spot, the two spot a conveniently (and I mean conveniently) unearthed treasure chest, opening their find to see if there will be any loot inside. Instead, they found a skull, which should send them gagging but for some reason, these kids laughed at it instead and threw it into the water. (Its either these teens have strong stomachs or they're insensitive. Possibly both.)

However, by doing so, they awakened and revive the infamous Jolly Roger, an undead pirate hellbent on killing off the descendants of his traitorous crew back in the pirating days. Fortunately for him, all of the descendants of said crew reside in Cutter's Cove (how...favorable for him), so he wastes no time getting his massacre rolling, starting with the teens. (Of course) Two of these unlucky teeners survive, a dull troubled couple whose account of a rotting pirate dismembering their friends didn't sit too well with the local cops and are now on the run cuz the boyfriend has a police record for beating the tar out of someone many moons ago and he's starting to look mighty suspicious again.

As the two lovebirds try to find out what or who killed their friends, Jolly Roger goes on with his business of decapitating doomed bloodlines, easily weeding them out by using his otherworldly powers while spatting out pirate-themed one liners and even getting frisky at a local strip club. (The latter, I kid you not) It soon becomes a race against time before more folks are slain, and it's up to the teen love dolts and a convinced detective to stop Roger.

Coming from the indie film company The Asylum (which many of you would have known for their infamously cheap mockbuster titles), I guess I should have seen a lot of the terrible coming from this movie, but what surprised me is that this dreck actually had some fun moments in it.

Read, "some"; while the scenes involving our living characters were as dull as watching a tortoise outwalk an old guy with a walker, something that the atrocious acting and scripting didn't help elevate, when it comes to the supposed horror scenes, the titular villain somehow help lessen the low-quality blow with his cheesy personality, hilariously bad pirate one-liners and the decent gore effects used for the massacre itself. Whenever he is around to either terrorize or do his devil's deed of collecting heads, it's bound to be an odd scene as almost all of the characters that he interact with seems barely fazed at the fact they're looking at a decomposed corpse walking and talking to them. (Let alone said walking talking corpse is a pirate) It can be a little awkward but hey, so long as it ends with one headless idiot or two, I'm sold!

Personally, I believe the real blow-back this film suffers from is the budget itself; the idea is a fun one and judging from the Jolly Roger make-up, the producers really liked it as well, but if they had the money to better the quality, the story, and/or the talent, I bet my soul that this movie would have been cult-classic worthy for its silliness and demented shlock.

If the movie's lack of logic and credible backdrop hadn't given you a clue that Jolly Roger isn't meant to be taken seriously, then I guess the real problem here is you. Massacre at Cutter's Cove is a film made for B (or even Z) grade film enthusiasts, people who can stomach the stupidity and weirdness that only these kind of films can offer. While it's no winner on my book as a "good" horror movie, I can look past the unimpressive audio and video, questionable talents, and ridiculous premise for an hour and 20 minutes of low budget Yo-ho-horror. Approach with caution but try not to let it get into you and remember to loosen up!