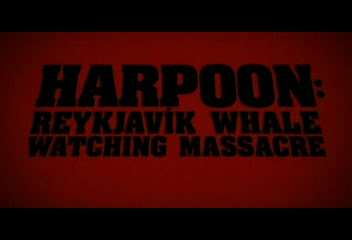 Iceland's first splatter flick definitely lives up to it's claim of being Texas Chainsaw Massacre in a boat, but could it be anything as epic? Not exactly, but it doesn't hold out on the gore and blood, a good thing since this film breathes nothing else but that.

A group of foreigners signs up for a whale watching boat ride in Iceland, which includes a whale-loving greenie (who's forced to go alone when her friend ditched her for more whale-huggers), three English biddies, an African American man and his girl friend (not a typo), a Japanese couple and their assistant, and an annoying French drunkard.

After a bore of a whale-less whale watching, their captain radios a group of whalers for directions to the nearest breeding ground for the tourists to watch. Unknown to these enthusiastic foreigners, said whalers aren't hunting whales anymore. They're hunting humans.

With each character flawed and paper-thin, clearly  made for the purpose of being disposable meat, Harpoon is the very definition of an easy slasher film filled with a high and gory bodycount, as, the way I see it, it's easier to enjoy watching people capable of selfish and evil things (the Japanese assistant and the first mate) or that are annoying (the French man and the "final girl") get killed off in grisly and very splattery manner.

Further to prove this point is this movie's their take on the villains, a "Fishbilly" family made up of a harpoon wielding psycho-mum, a mentally-slow and humped little brother who apparently worships a "Black Jesus" and "Father der Fuhrer", and the the family's eldest son who is more a decent villain than his little brother but not as vile as their mum; all are equally merciless, promptly enjoy hunting humans, but sadly only few of them have enough redeeming factors to make them memorable, making a good lot of them as disposable as the people they murder.

That being said, most of the good parts of the film rely on how moody and grueling the atmosphere is with grim color themes, functional camera works, and exhilarating scores. The open water setting may not be all that new but Harpoon succeeds on breathing a claustrophobic feel with added levels of tension with a slight change of using a smaller boat, much to work with this being the film's very selling point, the utterly brutal murders.

Again staying true to it's claim of a splatter film, almost no cast is safe from a slaying or two, as we have harpoon impalings, a hammer embedded into a forehead, head decimations, and even flaregun burns (just to name a few),  some of which aren't even done by the villainous family. You could say it has its similarities with a certain proto-slasher by Bava, A Bay of Blood (1971), with both films no short of victims and, technically, none are also all that innocent, though the only saving difference was that Bay had more going on to it than just a mere stalk-and-chase horror piece, in contrast of this film's approach.

That being said, Harpoon is not a film meant to be taken seriously; it's a joke, a big, evil joke on political correctness, played on a tune of an "epic" slasher flick where everybody dies and nobody is all-good, setting its sights in breaking all sorts of expectations. It's a hard-sell but you need to be very sharp to get some of the guffaws and morbid humor.

With the way it ended and it's unpredictable nature, along with a simplicity of a plot that sinks quite more easily than an anvil in still waters, certainly proves that Harpoon is entertainment material on its own. Serious horror fans looking for depth and meaning should sail away as far as they could unless they want something mindlessly funny and grue to pass by. That latter, I guarantee.

Bodycount:
1 male decapitated with axe
1 elderly male impaled on a dislodge metal rod
1 female gets a hammer buried into her forehead
1 female gets a throat cut with hunting knife
1 male impaled on a shot harpoon
2 females skewered on a harpoon, decimated by explosives
1 female dies from burns
1 male gets a flare gun shot to his eye, dies from burns
1 male decapitated by a thrown hatchet
1 male gets a sniper shot to the head
1 male had his head blown off with shotgun
1 female attacked by a killer whale, drown
1 male found with chopsticks stabbed into his neck
Total: 14
Posted by Kaijinu at 8:58 PM