A Generation Worth Forgetting: Texas Chainsaw Massacre: The Next Generation (1994) 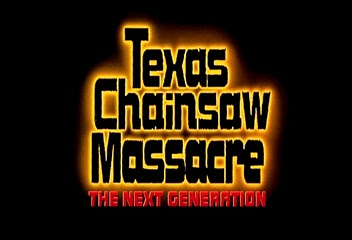 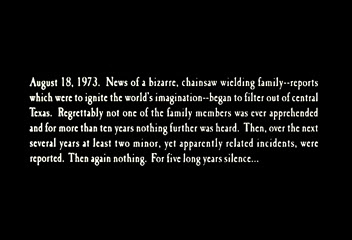 Yeah. Sure. Whatever. Sigh... How did it come to this?

I have no idea what the guys behind this movie were snorting but this has to be the lowest a franchise can to go. Hell, it even made some of the worst sequels look like Psycho in comparison! This movie! This God damn movie...

A re-imagining and psuedo-sequel of sorts, TCMNextGen is basically a story of four teens out for prom night, only to end up going through a night of unimaginable terror when one of them, in a state of momentary madness, decided to chase her cheating boyfriend. In a car. With her friends inside. And accidentally running over a guy in the middle of an overgrown Texan forest.

Now in a bigger spot of trouble, one of them stays behind to make sure almost road-kill man doesn't pass on to the afterlife while the rest of the three went to get help. And as you can tell at this point, they meet a family of freaks living in a white trash cabin in the middle of the forest. One by one, they fell victim to the family members' bizarre murderous assaults, but they are nothing to the oddity that is Leatherface! The Chainsaw wielding screaming transvestite!

Let's look at the facts here; Kim Henkel directed this piece of trash, a fact I can't get over with since he's practically one of the people responsible of the classic TCM 74. Perhaps he thought he could do better and I admire that, but seeing the outcome, I would rather shake him over and over again until he apologizes for wasting a good hour and a half of my life with this disastrous pile of dreck!

TCM NextGen isn't scary. Nor is it campy. Nor is it anything worth seeing to be honest. We know the story and we know what'll happen, but it lost everything that made this franchise good; Gone was the dread of the first, the cartoonish madness of the second, and/or the subtlety of the third. Instead, we have a whole movie about how a filmmaker trying to make horror villains out of a dysfunctional white trash family with little effect, considering these guy's diet of  human flesh was replaced with stale take-out pizza, their house filled with garbage instead of human bodies and the fact that these people act more like country dicks than insane serial killers.

This new clan includes Vilmer, the supposed leader of the clan who has a remote controlled leg brace and a successfully brainwashed  girlfriend Darla who believes his conspiracy delusions. We also got W.E. Sawyer, a highly cultured redneck with a penchant for literature, which is kinda okay but useless altogether. These new members of the Sawyer clan might be colorful but they're so over the top that I can't really decide whether I should fear them, or pitying them due to the fact that these guys can't seem to get along one bit. Even Leatherface here is less threatening; he hardly killed anyone and the only threat he has done was wearing a woman's face and chest, dress up in a drag, and flail his chainsaw around like a banshee. (And screams like one. Annoyingly) If there's anyone who made a large death toll here, it's Vilmer; he's more abusive and controlling than anyone I've seen in the series and could have been a villain of his own.

With hardly any bloodshed and no likable characters from any side of the party, I could actually forgive TCMNextGen for all it's imperfections. I can forgive the odd characterization, the lack of blood, the jump from cannibals to trailer trash, and heck, even the screaming, tranny version of Leatherface here; but they had to ruin it with the oddest and very far-fetched plot twist ever made for a slasher franchise: Conspiracy!

Turns out, Leatherface's family is actually a part of an Illuminati conspiracy where they are tasked to do something with "true horror". Whoever, or whatever these guys are up to, it makes little sense; I mean what could be more horrifying than being chased around in the thick forest by a shrill chainsaw-wielding maniac? What else? Perhaps, maybe, watching this film? If that's the point then I'm more than happy to agree upon that. But it isn't so, again, bullflop.

There's also some very confusing scenes in terms of continuity; I know the intention here was to start off fresh from the very first TCM as a remake-sequel hybrid, but since it did take notice of two "minor incidents" (two previous sequels), doesn't that mean W.E. Sawyer should have been executed via gas chamber years ago? And what's with Sally Hardesty making a cameo in the end? Wasn't it mentioned someplace that this survivor from the first movie had passed away under extreme catatonia? And since when did Leatherface fully embraced being a drag queen?

On the positive side, if the film would try to cut off itself from the TCM franchise, the premise of a slasher family controlled by an Illuminati group does make a good backdrop for a creative plot if they dwell on it a little bit more. Also, the "Lady leatherface", despite her shrew complexions, kinda grows in you in a more comic way, though her- I mean, "his" mask does give away this film's limited budget.

I wouldn't recommend this film to any cool cats out there. Not one single cat. But if you're the kind of kitty who likes to dunk its head to a moving propeller blade out of curiosity then it's your shredded grey matter, not mine. Do us a solid and just rent this flick somewhere. It'll save you the extra bucks.

In case you did enjoyed it though, well, good for you. I'm sure Lady Leatherface will love you...