A Prowler Within The Docks: La Muerte Del Chacal (1984) 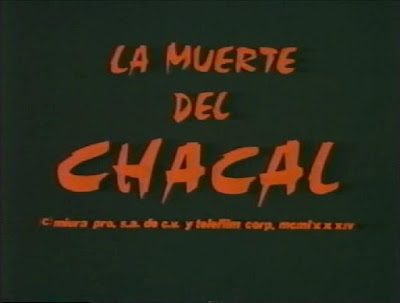 La Muerte Del Chacal ("The Death of the Jackal") (Mexico, 1984)
Rating: ***1/2
Starring: Mario Almada, Fernando Almada and Cristina Molina
We start the scene with the obligatory opening murders, this one involving a lengthy 10-minute long pre-credit run of two couples sneaking into an old abandoned shipwreck, unaware that it just so happens to be the hiding spot of a crazed killer in full black garb and their gang of trained attack dogs. One poor sap gets mauled to death while the rest got the sharp business end of a cane blade. 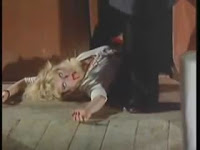 These killings are but the latest in a string of terrible murders and, surely, won't be the last, thus forcing Sheriff Bob to team up with his brother, naval patrol captain Roy (real-life siblings Mario and Fernando Almada respectively) to hopefully shed some light to the maniac's identity and put a stop to their reign of terror. Unfortunately, isn't too long before Bob finds himself targeted by the shadowy psychopath, endangering his family and colleagues unless he finds a way to use this against the killer themselves...
Curiously, though, this is only half of the movie's plot as we do get a surprise reveal to the maniac's identity unexpectedly midway into the story, shifting its tone from an action-packed murder mystery to a paint-by-number slasher flick with an unstoppable boogeyman. We jump five months later to see our killer locked up in a psyche ward and, taking cues from John Carpenter's Halloween (1978), was able to escape by snapping some necks and braining people dead despite spending five months without solid food and getting their nourishment through the veins. What soon follows is our killer murdering all those responsible for their capture before kidnapping the good sheriff's wife, luring him into their shipwreck lair for one last brawl. (And an uncomfortable amount of animal violence) 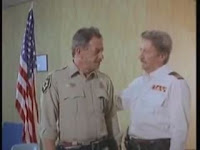 You can pretty much tell that not only were the 80s American slasher craze made its influence to La Muerte Del Chacal (1984), but looking at the killer's disguise and the methodical in-depth investigation following their murder spree, traditional Italian Gialli also has its spot on influencing this title. This results to a plot manageable enough to be enjoyed both as a methodic B-grade serial killer thriller and a bodycount horror flick, following a generous amount of hokey yet entertaining tropes the two horror sub-genres are known to offer, along with a few personal touch to make the movie standout a little bit more among its kin.
There's definitely an abundance of thrilling and suspenseful set-pieces here, including a savage double murder within a crowded strip club, a speedboat chase sequence with explosive conclusions, an psyche ward break-out and, probably the most chilling among them, the slaughter of a cop and her mother inside their own home. The maniac themselves are also a compelling-looking fellow with their full Giallo gear of black hat, coat and leather gloves, their uniquely classy weapon choice of a cane-sword and the fact that they trained their very own henchmen dogs to either subdue their victims or go for the kill. Their murder spree could've use some variety as most of them are dry on the bloodletting, but there is at least a good sense of build-up to them, especially those that took place around and inside the shipwreck lair, with camera work done to emphasize its isolation thus adding a well needed creep factor to the slayings. 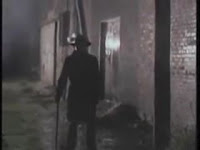 Sadly, as many slasher titles tend to do, it does skimped on some details that would have made it a bit more intriguing; the only thing I wished the film worked on more was the twist as, without giving away much, it could have been a rather interesting look into the emotional impact this would have between the killer and our sheriff. Instead, the whole shindig was downplayed with another "killer-has-mommy issues" to justify the loon's bloodlust and just have the film move on to a more conventional climax wherein they terrorize Bob and his wife. Oddly enough, this twist and the resulting flashforward did left a few plot holes open; with most of the murders taking places near the boat decks, no one ever bothered to look into the suspicious abandoned shipwreck? There's also the matter that, between the five months our killer is locked up, not only are the dogs are still in the damn ship, but all of the victims' corpses, too! It's incredibly stupid, yet hilarious if you don't ponder about it too much.
Though La Muerte Del Chacal (1984) isn't exactly an original masterpiece, I still see it as a rough gem for all slasher fans to find and enjoy. Apart from an okay set of actors and a direction that promises a lot of surprises, there is just a sense of popcorn exploitation in it that guarantees a good time for those who likes their bodycount flicks hammy yet gritty, silly yet shocking. Another genuine treat from our Mexican friends!
Bodycount:
1 male mauled by a dog
1 female murdered offcamera
1 male stabbed in the neck with a cane-sword
1 female stabbed with a cane-sword
1 female stabbed with a cane-sword
1 female ran through with a cane-sword
1 male murdered offcamera, thrown off a window
1 male immolated in speedboat crash
1 female stabbed through with a cane-sword
1 male had his neck snapped
1 male brained against iron bars
1 female found with throat cut
1 female repeatedly knifed, pinned to the wall by the throat
Total: 14
Posted by Kaijinu at 9:03 PM