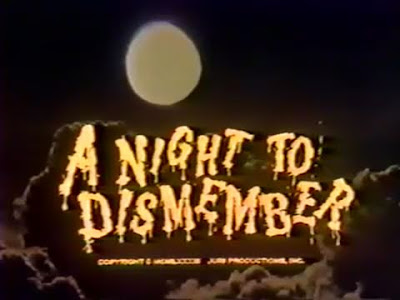 Back at 1983, slasher fans got the displeasure of seeing A Night To Dismember, a bodycount movie that was nearly lost in a fire-related sabotage attempt only to be salvaged and then had its surviving footage and a couple of random clips from other (and arguably better) cult horror flicks spliced together into a hodge-podge patchwork. As you would expect from this, the resulting product is an atrocious mess, making very little sense from a narrative point of view and made kinda worse by its cheesy editing. For the longest time, this final product would come in as one of the worst slasher movies from the 80s (gaining cult status of its own from this notoriety, strangely enough) and it appears this isn't going to change ever.

Until 2019, at a Youtube channel called Hamilton Trash Cinema; Ben Ruffett, founder of the channel, happens to have inquired with the movie's cinematographer C. Davis Smith about getting a copy of the film to screen and while Smith did not own any of the film's official VHS releases, he did have a copy of the original extended cut on tape which includes Diana Cummings in the lead role. So, does this mean we will finally have a long lost classic at our hands and eyeballs here?

Our lost movie opens in a cemetery, where a cloaked man welcomes us to the story in an EC Comic Crypt Keeper fashion, to the power of ten dad jokes. He regales us a tale of two generations of women; the first is Mary, pregnant out of wedlock and keeping it a secret from the rest of her family out of shame, a predicament that got her so troubled that she decided to stroll out one night, into a freak lightning accident that (as the narrator wordily suggests) grants her otherworldly powers which may or may not include her just going bonkers.

Through clairvoyance and a ghostly voice egging her to destroy those who made her suffer, Mary unleashes bloody retribution against anyone she deems worthy of her revenge, from her cheating lover to her abusive family. This half of the movie ends with Mary giving birth and dying from it, leading us to the next generation psycho, her adult daughter Vickie.

Adopted and unloved, Vickie gets the reputation of being the crazy weirdo of the town thanks to her dark family history, a matter made worse when she and her adoptive family decided to move in to her birth mom's home. Add in the troubles of her suddenly seeing bloodied visions of decapitated heads and skeletal hands, it becomes clear to us that Vickie inherited her mum's insanity and supposedly supernatural need to destroy people.

Much like the case of another lost slasher The Intruder (1975), the story behind the lost cut of A Night to Dismember is more interesting of a tale than the movie itself; though the film has its charms, it's definitely not for everyone since the plot more or less narrows down to just two women going stab-happy and murder anyone who mistreats them. It does try to add more substance to it by introducing some supernatural aspects, but this is done so cheaply that it's either close to nonexistent or too laughable to be taken seriously.

In fact, the whole movie is a joke of a production from its wonky editing to wooden acting, inconsistent details to overly electrified score. But as mentioned before, this can be a fun deal if you're into feisty cheese and hammy terror. Its budget certainly shows, but as far as being a slasher film goes, it's less in it for the gory shlock and instead boasts quite a maniacal energy on unleashing sizable killcounts, even if the methods used can be a tad repetitive or nonsensical. (Keep an eye on the house fire kill, it's whacked out of nowhere!) You could say that this lost cut is comparable to a very violent issue of an old school EC horror comic like Tales From The Crypt or The Vault of Horror turned feature length grindhouse flick, short on story but rich in pulpy horror goodness.

A better example of a so-bad-it's-good flick compared to its prior butchered release, this lost cut of A Night To Dismember is a tiny roughed-up gem of a find that only a brave few can enjoy. If you fancy yourself as the patient and forgiving kind then feel free to try this and brace yourself for a barrage of chunky stale cheese.