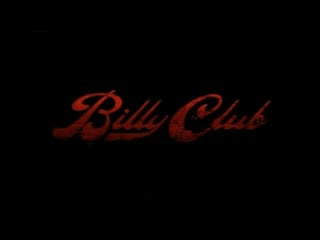 What looked like a standard slasher movie with a baseball theme, imagine my surprise on how serious, sullen, and dark Billy Club ended up as a movie. Could this be a good thing in terms of production, or a bad thing in terms of my taste?

Beginning the film with a slight homage to the opening scene of A Nightmare on Elm Street, we watch a baseball bat being modified with nails and a retractable machete before being put to use against a drunkard in an alleyway one scene later. The killer then blowtorches away child’s face from a photograph, possibly as a countdown for each victim he will be killing. So far, only four faces are torched off, leaving the killer six more to hunt down…

We then shift our attention to four friends reunited at their home town, paying respect to their late little league team mates and coach who were all victims of a brutal massacre 15 years ago. The perpetrator, a bullied team mate named Billy Haskins, was caught the very night of his little spree and was sent away to a loonie bin where the four believes he is staying for good. Little do they know, Billy found a way out, still with vengeance in his mind, patiently murdering off each league member with his trusted nailed and rigged bat. It’s only a matter of time before Billy makes his way to their sleepy town and silence all that remains of the team for good.

The fact that the killer dresses up as an umpire and wields an ingenious murder weapon would have been an easy mark for a cheesy ride but, as mentioned, Billy Club is anything but that. The story has a good and patient look into the lives of our future corpses, showing how close they are as friends and how they are not all that perfect as a human being. Best way to describe our casts is that they’re simply stuck; they’re haunted by the past, hardly making anything for themselves which adds a sense of depth to these characters and makes them quite sympathetic if one would be patient enough to overlook some of their annoying quirks.

A sympathetic victim works best in horror movies because we can relate to them as humanely as possible and root for their survival or, at least, their redemption. Much of the main cast are saved by the killer for last, however, so just to remind you that you are indeed watching a slasher and not a coming-of-age flick, we are generously treated with some pretty good kill scenes committed against the less important grown-up little leaguers. These scenes are presented in an array of styles, from black-and-white to full color, all of them occurred in various dates prior to our main stories as flashbacks; I find this a pretty smart move to bulk up the kill count as it paces the story quite nicely without jeopardizing the flow and tone of the real plot. The murders themselves are pretty gory at times, but I am quite glad on the simplistic approach on some of them and the killer’s little own calling card on each victims (branding the corpses with their team number using a stamp and the ever-present blowtorch) was a delicious nice touch.

Despite looking like a sports-themed slasher, the latter part of Billy Club takes a modest backwoods approach which worked pretty well with the budget and the team’s technical skills. Around this time, the story goes quite deep and surprises us with a clever twist and one of the more downbeat endings I’ve seen in a movie of this sub-genre. Without saying much, the message of the film got into me and it was quite ominous, especially with the bullying undertones taken to quite a drastic matter.

Perhaps the only thing that didn't work well for me in this film was the so-called “humor”; with it being serious in its tone most of the time, it’s hard to find any of the jokes to be all that funny and I found myself more engrossed on how the story ends after all of this to notice any of the supposed funnies. I guess what I’m saying is that the atmosphere worked so well in bringing the dread and intrigue that the attempts to add some light-heartedness in this film seem futile. Not saying this is an overly bad thing but it may be a subject of taste.

Much like the 2010 indie President’s Day, I found Billy Club worthy of my patience ever since I first read about it back at 2013. It didn't fail to deliver all the goods one should find in a slasher movie; interesting and well-developed characters, a menacing looking killer, kills that are quite right, and a story that sounds basic but executed competently. Worth the wait and the viewing!