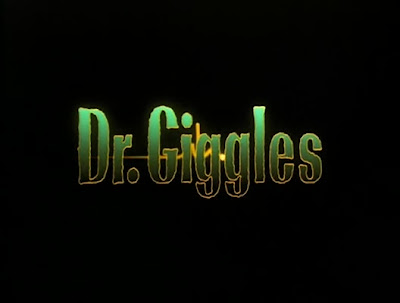 Around the late 80s and early 90s, slasher films were struggling to keep it fresh as barrages of sequels cheapened big names like Jason Voorhees and Freddy Krueger into mostly commercialized monsters whose likeness can be licensed into kid lunch boxes, and most of the newer slasher titles coming out then are cheapened clones of said big names and/or do-it-yourself horror movies filmed by some guy with a lot of time in his hand and little money to spend in making his movie making dreams a big production reality.

Still, struggling they may be, the efforts are occasionally rewarded with some titles getting cult followings or even a solid franchising that continues to this day. For this review, I'll be covering one title that gained a cult following for reasons which may include (but not limited to) bad puns and Darkman (1990)'s Larry Drake hamming it up as a homicidal maniac dressed up as a doctor.

So we begin this medical mayhem with an opening credit featuring a 90s CG blood cell merrily making its way through the circulatory system while cartoonish evil music plays in the background. By the time we get to the heart, a hacking sound is heard and a scalpel slices the organ, killing the unfortunate soul it is attached to. This transitions to an impromptu heart surgery perpetrated by none other than our titular psycho Evan Rendell (AKA "Dr. Giggles" due to his habit to spontaneously giggle whilst parading around dressed up as a doctor) who then proceeds to hack and slash his way out of the loonie bin he is kept in, steal a car and drive back to his home town where his father, a bonafide doctor-turned-murderous schizo, is now some sort of boogeyman children would about during a round of jump-rope after being lynched 35 years ago. Guess who's ready to assume the mantle?

All the while, we are introduced to the heroine of our story Jennifer "Jen" Campbell, your typical teen attending Moorehigh High with a bit of a bad heart which prompts her to carry a monitor on her at all times. Despite this, she tries her hardest not to be a downer for everyone, which is considerably getting harder by the minute as she not only has to deal with a stepmom who's not liking her back, but she also has a rival trying to score one with her boyfriend Max who may have succeeded behind her back.

Oh, and there's Dr. Giggles, now garbed in a doctor's get up and armed with a set of pimped-up medical equipment designed for death, making house calls around town in a mission to "cure" them for killing his father. Some gets injected with poison and killed with scalpels, others gets their a stomach pumped and churned with a drilled nozzle, it isn't long though before Giggles encounters Jen and learns of her heart condition, which puts the mad doc in an inspired predicament to stalk her in good hopes he can perfect his heart surgery skills, whether it'll kill her or not.

With a title that should have been enough to tell what's in store for us, Dr. Giggles fully embraces what makes a slasher movie silly and does it in a way that's cheeky, messy and most importantly, fun. In terms of story, this movie has all of the classic slasher trappings from the ole sex-is-a-death-sentence excuse for stabbing a girl with a sharpened thermometer while castrating her boyfriend, to the incredibly goofy one-liners which channel Freddy Kruger's of the latter year Nightmare on Elm Street sequels, though more deadpan and medically inclined here. In turn, the film is predictable at most, but the genuine cheddar aftertaste its humor leaves behind is enough to direct this movie to a lovable guilty pleasure direction.

Much to its appeal includes Larry Drake's performance as our mad general practitioner, having no problem spatting out medical quips with much gusto and over-the-top ferocity when the deal calls for it. His act even benefits from the movie's fair number of plot holes and silly executions as Giggles' impassive nature to the fact that his little medical bag carries all of his weapons (some of which resembling novelty gag props, others straight out of a SAW sequel) and that he has a near-working operating room-cum-lair underneath his old home just adds to Dr. Giggle's wonderfully silly charm. Of course, there's also Holly Marie Combs of TV’s Picket Fences and Charmed as Jennifer Campbell, also delivering a straight face over her melodramatic dialogue in your typical definitive final girl fashion.

On the technical department, Dr. Giggles is fast paced, well shot (love the Hall of Mirrors scene!) and definitely delivers good grue with a chunk of it in theme to the good doctor's mad practice. If he's not waving around a medical tool-turned-weapon, he'll be murdering folks via  malpractices from hell with bloody wet results to show off, courtesy of early days K.N.B. EFX Group. And why stop with murders? How about a scene where a live child slices his way out of his own mother's fresh corpse where he is sewn into, just to escape an angry mob? Only in Dr. Giggles, everybody. Only in Dr. Giggles.

A far cry from being the movie that saved the slasher genre, Dr. Giggles is still an underrated cult classic on my and many other's book. It's corny and silly, bombed the box office and panned by critics, but for the right audience with the right mindset, this is a rough gem that exists purely to entertain and entertain it did. So, have a heart and if you're yet to see the good doctor, then it's about time you do!